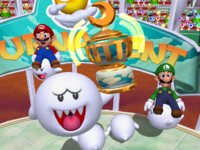 The Moonlight Cup is the second of the Star Tournaments in Mario Tennis and Mario Power Tennis, which is unlocked by completing the Rainbow Cup. Its difficulty is comparable to Flower Cup and Star Cup, although players and opponents hit stronger due to the star rank. The tournament takes place in the Clay Court in Mario Tennis and the similar Peach Dome Clay Court in Mario Power Tennis. The first two matches have 3 sets and 2 games, while the last match has 5 sets. Aesthetically, it takes place during the sunset for the first match and progresses to night in the second and last match. When players clear the Moonlight Cup, the final cup, the Planet Cup, is unlocked.