Bongos are drum-like instruments first encountered in the game Donkey Kong 64; however, they have become much more used in the Donkey Kong franchise since then.

In Donkey Kong 64, a pair of Bongos can be purchased by Donkey Kong from Candy Kong in Candy's Music Shop. With these bongos Donkey Kong is able to use the special attack, "Bongo Blast". The attack sends out soundwaves that can defeat any nearby enemies; if Bongo Blast is used on a Bongo Blast Music Pad then it will cause an event to occur.

In the game Donkey Konga, Donkey Kong and Diddy Kong, while lazing around on the beach one day, come across some bongos half-buried in the sand. Taking the bongos, Donkey and Diddy decide to become experts with them and hold concerts to make which they can make money to buy huge amounts of bananas with.

During gameplay, Donkey Kong has to beat the bongos to the rhythm of the music. The bongos are used in the same way in Donkey Konga 2 and Donkey Konga 3: Tabehōdai! Haru Mogitate 50 Kyoku.

Bongos are also used by the player in Donkey Kong Jungle Beat to control Donkey Kong. This game's control scheme was very different from most games, because of the unique controller. Among other controls, hitting the left bongo makes Donkey Kong move left, hitting the right makes him move right, and hitting both makes him jump. 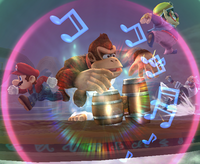 Special jet-propelled bongos are used by the Kongs and the Kremlings to race each other in the game Donkey Kong Barrel Blast. In this game, each set of Bongos is personalized to match the user. For example, Donkey Kong's emblem is on his, and Diddy Kong's look similar to his jetpack.

The Bongos appear in Mario Kart Arcade GP and Mario Kart Arcade GP 2 as one of Donkey Kong's special items, under the name Conga. Upon using the Conga, the user will play a drumbeat on it for a short period of time, producing damaging sound waves. Any racers who come too close to the user during this time will be hit by the sound waves and lose speed.

In Super Smash Bros. Ultimate, an Advanced-class support spirit uses artwork for Donkey Konga of Donkey Kong playing the bongos. The spirit grants its user the ability to reflect projectiles with a perfect shield. It can be purchased at Timmy and Tommy's for 1000 Spirit Points at regular price.