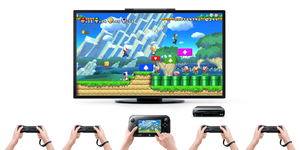 Boost Mode is a feature introduced in New Super Mario Bros. U, where the player with the Wii U GamePad can interact with the game, not by controlling a playable character, but by using the GamePad's touch screen to manipulate the current gameplay.

Boost Mode allows the GamePad player to place platforms in the game to help or hinder the other players. These platforms can be placed by tapping an empty/vacant area on the touch screen, and the platforms come in a variety of colors and depict playing card suits. They include blue spade platforms, red heart platforms, green club platforms, and magenta diamond platforms. The icons on the blocks will disappear over time, and the platform itself soon after. Only four platforms may be on screen at one time, and placing another results in the first platform placed disappearing.

If another player steps on the platform with the icon still on it, it will spit out three coins and a star meter on the GamePad will have a section filled. Standing on ten platforms will fill the meter entirely, and as a result a Boost Star appears; by tapping the Boost Star on the GamePad, the player enters Super Boost Mode, allowing them to instantly defeat enemies and hit blocks by tapping them for a limited time, similar to a Starman.

Boost Mode is not limited to platforms, however, as the player using Boost Mode can also stun/damage enemies by tapping them, which can be done repeatedly to keep them from attacking. Additionally, 3-Up Moon Blocks (which will release a 3-Up Moon after being hit and then remain solid) can only be seen on the GamePad player's screen, and become usable for the other players only after being tapped; the block will revert after about 5 seconds, after which it can be hit again.

Nothing happens if the player taps Mario or any other character. Boost Mode also cannot be used in Toad Houses.

Boost Mode is not available in New Super Mario Bros. U Deluxe due to being unable to access the Nintendo Switch's touch screen easily during docked play or multiplayer.

The following is a list of the effects on enemies that occur when touching them in Boost Mode: