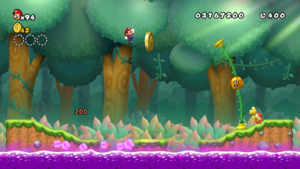 Bramballs only appear in World 5-3. They are orange Pokey-esque enemies with a permanent frown, brambles for legs, and yellow suction cup-like feet. Their sole attack is moving around a set path by flipping themselves around in a Slinky-style motion and planting their feet on flat surfaces. When they reach the end of a small piece of land or wall, they will flip the other way and continue moving. Touching the feet or arms of a Bramball will hurt the player.

Pre-release, Bramballs were shown to have brown feet, instead of yellow.

Bramballs return in New Super Mario Bros. U, being the enemies of the titular Bramball Woods. In this appearance, their heads turn out completely orange and a leaf sprouts from it as the music beats, similar to regular Pokeys in newer appearances. If Mario hits the underside of a Bramball in this state, it will drop a large number of coins instead of just one. Tapping on one using Boost Mode would cause one to smile and turn the other way.

Bramballs return in New Super Luigi U, acting the exact same way as in previous titles. They are only found in Heart of Bramball Woods.

Bramballs reappear in Mario Golf: Super Rush in Shelltop Sanctuary and the Forest course of Target Golf. In Shelltop Sanctuary, four of them stand in a row on a waste area, while one stands on two elevated slabs of stone. If hit by a golf ball, the Bramballs will rotate their head all the way around.