Papa Mario's personality remains relatively unestablished, having but one speaking role: Super Mario Issun-bōshi. Here, he was shown to be a caring and understanding father figure, cautious for Mario's safety, yet recognizing of his son's need for independence. Across his three unique appearances, his physical features have varied slightly. With the exception of Issun-bōshi, he is portrayed as a skinny man, and in all of his appearances where the color of his clothes are visible, he wears blue and yellow. While his face has always been concealed or obscured (apart from an unconfirmed appearance in merchandising), what could be seen of it in Super Mario Issun-bōshi shows that Papa Mario's face resembles Mario's, as does his mustache. 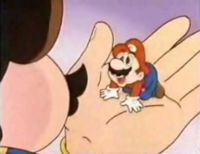 Papa Mario first appeared in the short anime video Super Mario Issun-bōshi, a retelling of the Japanese fairy tale Issun-bōshi with Super Mario characters. Though he is not given a name, Mario refers to his father as "Papa". Through the camera angles used, the father's face is obscured at all times, although what can be seen is similar to his son's: pudgy with a large nose and identical mustache. Also like his son, Papa wears his brown hair in the same style and wears blue overalls. However, his undershirt is yellow instead of red, and he does not wear gloves or a hat.

He and his wife lived in a futuristic house on top of a hill. One day, they were magically granted a son, Mario, who was small enough to fit in his father's hand, even after he had reached adulthood. When Mario grew up, he asked Papa for permission to explore the world on his own. Agreeing that Mario was capable, Papa fashioned his son a motor boat made out of a kitchen bowl, a spoon to row the boat, and a sword made out of a needle. Mario's father saw him off on his first trip, carrying him in the boat to the river's edge. 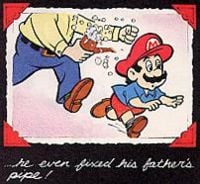 The character had a small role in the Nintendo Comics System publication, Family Album "The Early Years". In the third photograph, a young, concerned Mario is being chased by his father, who is shaking his fist and holding a smoking pipe with bubbles coming out of it. The caption of the photograph reveals that Mario "fixed" his father's pipe. Mario and Luigi's father appears slightly skinnier than in Super Mario Issun-bōshi and is wearing a light yellow shirt, blue pants, and dress shoes. The father's face is hidden, cut off by the pictures edge. 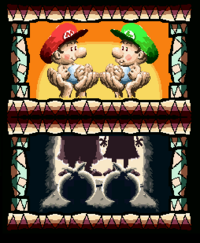 At the end of Super Mario World 2: Yoshi's Island, Mario and Luigi's father made his first video game appearance. He is portrayed as a skinny man in a nightshirt of indeterminate color. Only his lower half and hands are seen. Once Yoshi rescues the stork and Baby Luigi, the stork takes Baby Mario and Baby Luigi and continues on his way to deliver them to their parents. The video game's narration states that the boys' delivery has been "long awaited." Flying to a small, unnamed town surrounded by mountains where "mom and dad live", the stork leaves the bundles on the doorstep of a house that resembles a Mushroom. The parents awake, turn on a light, open the door, and are pleasantly surprised to see their twins have arrived. Luigi is picked up by his father and Mario by his mother.

The introduction to Yoshi's Island DS features a short retelling of Super Mario World 2: Yoshi's Island. Baby Mario and Baby Luigi are seen in the hands of one of their parents. Additionally, the introduction shows various children being kidnapped by Kamek and his Toady minions. Mario and Luigi are taken from their parents, who are not shown, during the night. The lights are on and red marks indicating commotion emerge from the house during the kidnapping; it is likely, yet unconfirmed, that Mario and Luigi's father is one of the people making this commotion.

It is revealed in Yoshi's New Island that the parents seen in Super Mario World 2: Yoshi's Island are not the parents of Mario and Luigi, and the stork made a mistake. By the end of the game, the stork delivers the Mario Bros. to the right parents.

Mario and Luigi are Papa Mario's only children, and their mother, Mama Mario, is presumed to be his wife. Earlier sources (such as Family Album "The Early Years") implied that Mario was older than Luigi, although they are usually recognized as twins as of Super Mario World 2: Yoshi's Island (however, twins are divided into older and younger siblings in Japan, even if they're only minutes apart).

The Super Mario Bros. Super Show! introduces many more members of the Mario family, although Papa Mario himself does not make an appearance. Judging from her last name, it is implied that the late Grandma Mario is Papa Mario's mother, as it is revealed that Mama Mario's maiden name is "Rigassi" and she took on her husband's surname when they got married. Papa Mario has a pair of nieces named Marianne and Luigeena, and two nephews called Mario Joe and Luigi Bob. It is not revealed which sides of the family any of the relatives hail from, so it is unknown whether Aunt Luigeena is his sister or sister-in-law. The Adventures of Super Mario Bros. 3 mentions a second sister/sister-in-law named Aunt Maria.