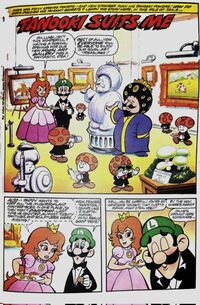 The Mushroom Castle is hosting a formal opening ceremony for its new Royal Art Gallery, in which they are able to display their royal art treasures for everyone to enjoy. At the occasion, Princess Toadstool tells Luigi that the gallery is also being opened because the Mushroom King wants to make sure the masterpieces are all kept in one place so they won't disappear, stating that when last he counted, almost twenty paintings and sculptures were missing ("Sounds like a kleptomaniac with really good taste!"). Toadstool then asks where Mario is, with Luigi replying that "he's around here somewhere." After Toadstool goes to get a new tray of snacks, Luigi gestures to Mario that he can come out of hiding now, but he refuses. Luigi pulls him out, saying that just because he's wearing a raccoon suit instead of a tuxedo is no reason for him to be embarrassed.

When asked why he is wearing said suit, Mario explains that, because Luigi mistakenly ordered only one tux for them, he had to go to a suit rental shop, and this was the only one they had. Luigi remarks that maybe no one will notice, but this is quickly disproved by the Mushroom King commenting Mario on his raccoon suit, much to the plumber's chagrin. Just then, an old man walks up to Mario, saying "I couldn't help noticing your Tanooki Suit! It's been years since I've seen such a fine example of Tanooki-tailoring." The old man explains that Tanooki was the name of Mushroomland's first tailor, whose trademark was to sew a tail on the back of every suit he made. Adding to that, Tanooki's suits were said to possess magical abilities that could be granted to their wearers, but he was eventually forced to go out of business and soon disappeared altogether. The old man leaves at that point, telling Mario to take good care of the suit, for "a genuine Tanooki is rare these days!"

Mario notices a little button on the front of his Tanooki Suit and curiously presses it, and thus transforms into a statue. Luigi, who is helping himself to the celery puffs, doesn't see this and, when Mario doesn't hear him, thinks he has gone back into hiding. At the same time, the Mushroom King is showing a painting called The Mona Mushroom, by an artist named De Fungi, to some patrons, during which he notices Statue Mario and says to himself that he doesn't remember "that statue" being there. Inside his statue form, Mario is amazed that the old man was right about the suit having magical abilities, but cannot seem to figure out how to change back to his normal form.

That night, after everyone else has left, Toadstool and her dad head off to bed, deciding to clean up the gallery in the morning. But once they're out of the room, two Mousers sneak in to steal all the paintings and statues, including Mario, stating their plans to sell the stuff to Bowser. The next morning, Toadstool comes into the gallery and, upon realizing that they've been robbed, says she'd better call Mario, unaware of his current predicament.

At Bowser's castle, a Hammer Brother asks the Koopa King why exactly he's collecting fancy artwork now. Bowser explains that he's a new kind of collector - the artsy-crafty type; his plan is to buy the art from the mice for a small price, then sell it to Wart for a much higher profit. The two Mousers show up at that point, bringing in the artwork and Mario, who is confused as to why Bowser would want fancy art. As the Mousers place in the art, Bowser gives them their payment of fifty Koopabits (with Mario commenting "I'm worth at least seventy-five!"). Bowser then hears Wart knocking outside, so he gets the Mousers to leave by claiming the cops are outside and that they should go out the back way while he covers for them.

Wart comes in to look at the artwork that the Koopa King is selling him. He notices that Bowser has The Mona Mushroom and excitedly offers to pay one billion Koopabits for the painting, then at Bowser's suggestion raises to pay five billion for the whole collection; during this, Mario realizes that Wart will take it (and him) all away to Subcon, and Mushroomland will never be able to reclaim it. Just as the art is being loaded into a crate and onto Wart's forklift truck, Mario thinks "I wish I could be human again," and suddenly changes back from his Tanooki Suited human form, much to the shock of the two villains (who mistake him for a big raccoon). Wart demands to know what's going on, so Mario makes up an explanation, telling Wart that the so-called "masterpieces" Bowser is selling him are in fact "products of the Apook Corporation" that "will turn back into worthless raccoons" in ten minutes. Furious, Wart takes his money back from Bowser and picks a fight with him, during which Mario takes the forklift and drives off with the masterpieces. As he leaves, Bowser remarks to himself that "that big raccoon looks awfully familiar".

Soon after, in spite of driving through the wall of the castle, Mario is congratulated by Toadstool for bringing back the stolen artwork, except for "the funny-looking statue". Mario assures her that he feels that statue "will turn up again... someday."