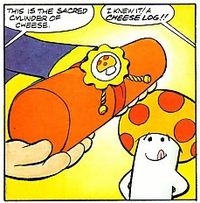 In "A Mouser in the Houser", the Mushroom King trusted Mario, who was traveling to the organization alongside Princess Toadstool, to deliver the Sacred Cylinder of Cheese to the ambassador on the event described in the comic. The Princess and Mario decide to use Transport Tubes to travel to the meeting, although Mouser's tampering has made the Transport Tube system unreliable. After some stumbling around, Mario and Princess Toadstool are lost on an enormous castle. Toadstool, angry at Mario for his accidental spilling of cheese on her dress, kicks him off the castle's tower.

Eventually, Toadstool, refusing all offers to become queen of the Mousers, decides to rescue Mario and save both him and the Sacred Cylinder of Cheese. She manages to find him and the cheese bestowed upon him, an angry Mouser who still wished to call Princess Toadstool his queen has followed her. The Princess, who has lost respect for her father's tube of cheese throws the Sacred Cylinder of Cheese at the Mouser, who, disdainfully recalling all the cheese he collected on his birthdays, anniversaries, his graduation in 1973, and the Groundhog Day of 1981, retreats. In the end, the Mushroom King blames Mario for the loss of his Sacred Cylinder of Cheese, although it is then revealed that even the ambassador despises the Cheese Log as most others did.