World 1-3 is the third level of Grass Land in Super Mario Bros. 3. It can be reached by completing World 1-2. 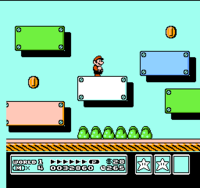 World 1-3 in the NES version

The player starts on a long plain with some colored Semisolid Platforms and a Boomerang Brother. Afterward is a structure of bricks that can be broken by knocking a Koopa Troopa into them, and placed above the ? Block on the left is a hidden Magic Note Block that can send the player to Coin Heaven, and the Warp Pipe at the end will bring the player back down to near the end of the level. Past the brick structure are several pillars of Wood Blocks, though the second pillar has a hidden power-up in the top block, collected by bumping into the side of the block. Afterward is a Boomerang Brother and several more Semisolid Platforms with Koopa Troopas and Goombas. After these platforms is the end of the level.

There is also a hidden Magic Whistle located in this stage. Near the end of the level with the Semisolid Platforms, the player needs to stand on the white platform and crouch. After a few seconds, the player will drop behind the scenery and can run to behind the black backdrop at the end of the level to find a hidden Toad House containing the Whistle.