World 8-1 is the first main level, and the seventh level overall, of Dark Land in Super Mario Bros. 3. It becomes accessible after the player clears World 8-

and its own completion opens World 8-2. Originally, the level was wholly dark, resembling the areas at the ends of most of the game's levels, but in remakes, it was given a deep forest theme.

The player starts on a small piece of land; directly above them is a Switch Block within a Brick Block that the player has to fly up to in order to find, and pressing the switch will reveal many Blue Coins. Across the gap are pipes with a Venus Fire Trap followed by several Piranha Plants, and a Fire Flower (or Super Mushroom) power-up can be collected from the second ? Block. If the player can fly up to the top of the tall Warp Pipe, they can enter a room containing three 1-Up Mushrooms. After some Brick Block formations are several Turtle Cannons that fire standard Bullet Bills, and a ? Block containing a Starman can be found in between them. Afterward is a narrow section with more Turtle Cannons and a row of ? Blocks, with a Brick Block containing a 1-Up Mushroom placed between them. Beyond the narrow section is a Boo and a Brick Block containing a Super Leaf (or Super Mushroom) power-up. Next is a lone Koopa Troopa on a Semisolid Platform followed by a set of pipes with a Piranha Plant, which is where the player will fall down near if they went through the secret room from earlier. Afterward are more tall Turtle Cannons with Koopa Paratroopas placed to help the player jump across the gaps. Next is a Jump Block the player can use to jump to the pipe ahead, and after the next set of pipes is the goal. 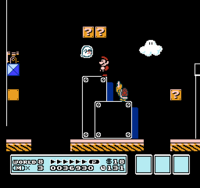