Fortress is the fortress and fifth level of Grass Land in Super Mario Bros. 3. It can be accessed after completing World 1-2, and its own completion unlocks World 1-5.

As the first fortress level of the game, this level is relatively simple. Obstacles such as Roto-Discs and Podoboos are introduced, as well as Dry Bones.

The player must jump across multiple gaps, while avoiding the Podoboos that continuously rise up and down between them. A ? Block containing a Fire Flower may be found here. After more gaps, there are a few sets of Roto-Discs that the player must get through, followed by more gaps. At the end of the section, a door leading to the next part of the level may be found. Another ? Block, this time containing a Super Leaf, is also found here, along with a single Dry Bones.

Beyond the door is a hallway with a spiked ceiling. The ceiling slowly rises up and down, meaning the player must duck in order to avoid taking damage from the spikes. At the end of the section is another door, which rises up and down from the ground with the ceiling. Beyond this door is Boom Boom's arena; defeating Boom Boom will destroy the fortress, unlock the gate near World 1-1, and allow the player to continue onto World 1-5.

The secret exit of this level can only be accessed with Raccoon Mario. At the end of the first section, the player must run left away from the door, fill up the Power Meter, and fly up towards the ceiling. The player must then continue to walk right on the ceiling, and then enter a door to another room upon reaching the end. This room contains a Magic Whistle, and will immediately clear the fortress; however, the gate near World 1-1 will not be opened. 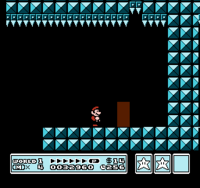 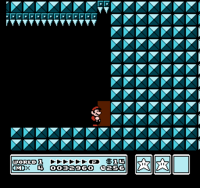