World 5-3 is the third level in Sky Land from Super Mario Bros. 3. This level is playable upon completion of World 5-2. Beating this level unlocks access to the World 5-

Tower. This level is, however, optional, as World 5- 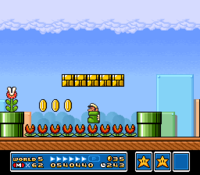 This level is composed of two main areas. Players start in a small area with a hidden 1-Up Mushroom and a Warp Pipe leading to the first area. In this area, there is a Spiny and a Venus Fire Trap guarding a ? Block with a power-up. After this, a Kuribo's Goomba appears, followed by some Spinies. Next is a row of Brick Blocks, with some holding coins, along with another Kuribo's Goomba, a Bob-omb, and more Spinies. Afterwards, there is a gap with Munchers on it and some Brick Blocks above. If the player has a Goomba's Shoe, they can jump on the Munchers without getting hurt, and collect a 1-Up Mushroom. This is followed by Piranha Plants, another Venus Fire Trap and a Warp Pipe that leads to the second area.

In the second area, the player finds a structure made of Brick Blocks and two Ice Blocks, with a Kuribo's Goomba trapped inside. Next are some Munchers and Spinies, followed by a Piranha Plant, another Bob-omb and a Venus Fire Trap, along with a ? Block with another power-up. After this, there are more Piranha Plants and a Spiny, followed by a Warp Pipe leading to the goal.