Airship is the thirteenth and final level of Sky Land in Super Mario Bros. 3. This level is playable upon completion of World 5-9, and its completion progresses Mario to a new world: Ice Land. 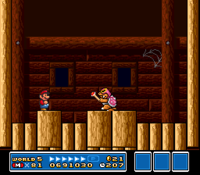 The room where the boss battle takes place has an uneven floor due to some flooring being slightly raised. Roy's method of attack is shooting his magic wand at Mario. Due to his size, the room shakes when Roy jumps towards Mario, as well. If Mario is standing while Roy lands from his jump, Mario will be temporarily paralyzed and vulnerable to Roy's attacks. Roy is defeated after his head is jumped on three times.