From the Super Mario Wiki, the Mario encyclopedia
(Redirected from Magic Wand)
Jump to navigationJump to search

It has been suggested that this page be moved to Magic Wand. (discuss)

This article is about the recurring object in the Mario franchise. For the treasure in Wario Land 3, see The Grasslands § Green Chest: Magic Wand.

The magic wands[1] are magic items that are often seen in the hands of the Koopalings and Magikoopas. In Super Mario Bros. 3, magic wands were stolen from the Mushroom World's kings, and were used to transform them into various helpless creatures (which varies between the NES version and the SNES/GBA remakes). The Koopalings also used the wands to shoot harmful projectiles when encountered as bosses. Mario and/or Luigi had to retrieve them in the airship to restore the king and proceed to the next world.

Seven magic wands first debuted in the game Super Mario Bros. 3, where one of the seven Koopalings stole one each from the seven kings and use them to turn the kings into animals (or in the case of the Pipe Maze king, a plant). In the e-Reader levels for Super Mario Advance 4: Super Mario Bros. 3, despite the wands being returned to their rightful owners, Larry, Morton, and Ludwig were shown to wield them in battle again. Promotional artwork for the Pinball game adaptation Super Mario Bros. Mushroom World showed that, aside from the Koopalings, Bowser utilized a similar wand. 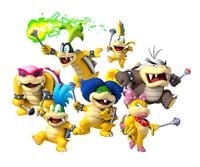 In New Super Mario Bros. Wii, magic wands are once again used by the seven Koopalings to defeat Mario and his friends. As with Super Mario Bros. 3, each Koopaling can generate spells of varying speed and intensity, with the exception of Wendy and Lemmy, who utilize glowing rings and circus balls, respectively. The spells emitted by the Koopalings' wands also bear the Magikoopa insignia, indicating a probable connection.

Alongside the Koopalings, their magic wands also make a return in the game New Super Mario Bros. 2, where all the Koopalings, with the exception of Wendy O. Koopa, use their wands in combat. In addition, although Lemmy retains his wand's ability to conjure circus balls, Morton's normal spells are instead replaced with conjuring spiked balls in his fight with Mario. All the Koopalings used their magic wands again in the final level where they attempt to defeat Mario by turning him into stone and making him fall in lava. The Koopalings eventually utilize their wands once again near the ending, this time to aid Bowser by having him grow larger, although this also resulted in them being hit by the newly enlarged Bowser.

Three of the seven Koopalings with Magic Wands

The magic wands make their return in New Super Mario Bros. U, but only Larry, Iggy, and Ludwig retain them. Larry, as per usual shoots out blue fire with his wand. Iggy, as per usual, will shoot out green fire with his wand, although he will also fire red fireballs that, upon making contact with the magma in his cabin, will summon Magmaarghs. Ludwig fires his regular blue fire spells in threes as usual. However, he also utilized the wand to create two false duplicates of himself and the wand. The clones fire two magic blasts. Additionally, the orb of the magic wands now have purple glow to it whenever each of the three Koopalings are casting their fireballs.

Magic wands also had prominent roles in The Adventures of Super Mario Bros. 3, being used to make and solve tomfoolery. Some are owned by the Koopas themselves and others by the kings of the Mushroom World.

Morton uses his wand to turn the Mushroom King into a rabbit in the book Leaping Lizards. However in that book the wand's magic only worked one-way, so when Luigi tried to use the wand to reverse the spell, instead of turning the king back to normal it turned him into a giant rabbit. In the subsequent book Koopa Capers, Wendy steals her brothers' wands in order to combine them with her own using a potion she learned about in Bowser's copy of Reptile Magic and VCR Programming Instructions.

In Mario & Luigi: Paper Jam, Roy, Wendy, Ludwig, and Larry also utilize their wands when their partner is taken down, with Mario, Luigi, and/or Paper Mario needing to counter the spell they cast.

In the sidequest game, Iggy and Ludwig only utilize their wands. Iggy is able to use his wand to raise he and his teammates' POW, while Ludwig is able to use Chain Shot.

In the Super Mario Mash-up in Minecraft, Hoes are replaced by magic wands.

The Koopalings and their magic wands in Paper Mario: Color Splash.

The Koopalings also use wands in Paper Mario: Color Splash, and the seven colors on which the whole game is based are the colors of the gems of these magic wands. Morton, Wendy, Roy and Lemmy also transform their wands into an object (a hammer, a giant golden ring, a Paint Blaster and a ball, respectively). It is also revealed in the game that, while their wands have tremendous power, even they have their limitations. Specifically, Lemmy was forced to use a "sleight of hand" to make off with the Green Big Paint Star during a performance because his normal abilities via the Magic Wand could not actually impact the Green Big Paint Star.

The Koopalings use their wands in Super Smash Bros. Ultimate, where they replace the hammer that is used in their up aerial attack, as well as their up special, Abandon Ship.

In Mario Kart Tour, Peach (Halloween) holds her wand for her trick animations.

The seven magic wands look like large silver rods (gold in the sprites for Super Mario Bros. 3) with round, dome-shaped gems at the end of them in different colors. The wands' gems are vividly colored, and that is where the spell blasts are released from.

The Koopalings' magic wands vary in color from game to game:

The magic wands were capable of transforming people into animals/plants, although it is implied that they can also be used to restore them to their original form. In addition, the wands can also fire three-ring shots/spellballs, or in some cases, summon candy rings (Wendy O. Koopa), spiked balls (Morton Koopa Jr., New Super Mario Bros 2 only), or magical balls (Lemmy Koopa). At least in Iggy and Ludwig's case, the wands can also either summon enemies such as Magmarrghs or create duplicates of the wand's wielder. Although the wands have all of these abilities, it appears they do not affect other magical items as, in Paper Mario: Color Splash, Lemmy's wand does not appear to affect the Green Big Paint Star.