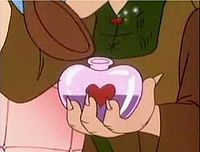 The Passion Potion is a type of love potion that is featured prominently in The Super Mario Bros. Super Show! episode "Love 'Em and Leave 'Em".

Later on, Queen Rotunda, during her forced wedding to Mario, ingests another dose of Passion Potion, as does Prince Pompadour, who happens to be nearby. This results in the two falling in love with one another and subsequently marrying. Hildy also drinks some Passion Potion accidentally dropped into the wedding punch bowl by Luigi and ends up falling in love with him. She then chases him, Mario, Princess Toadstool and Toad across Rotundaland.

Mentioned ingredients of the Passion Potion include one spring mistletoe, one ripe artichoke heart, and one Fat Boys record. When Princess Toadstool and Toad attempt to create some, however, the potion explodes violently.