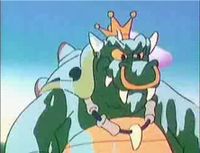 Industrial Strength Itching Potion is a clear liquid that, after touching a person's flesh, can induce unbearable itchiness. It has only appeared in The Super Mario Bros. Super Show! episode "Jungle Fever".

Ingredients mentioned by Dr. Sheldon that are used to create the potion include various vegetables, herbs, spices, four left legs of a right-handed centipede and radishes; additionally, three other ingredients, three powders, one of which is white, were also used by Dr. Sheldon to create it. When the potion is in the midst of being created, it also generates large amounts of white smoke.