"Jungle Fever" is the eleventh episode of The Super Mario Bros. Super Show! 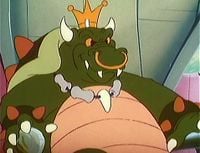 King Koopa as he appears as a jungle native.

In the Amazon Jungle, Mario is still hacking through plants with his plunger as Luigi asks how much further it is until they reach Sheldon's village. To answer Luigi's question, Princess Toadstool looks at a map and tells Luigi that the village is close by. After Princess Toadstool tells Luigi this, Toad, after walking a few feet, accidentally walks off the edge of a cliff and is left grasping at a vine, yelling for help.

As Mario, Luigi and Princess Toadstool rush to the edge of the cliff, Toad, using the vine he is hanging on to, manages to pull his self up to them. After Toad pulls himself out of George's Gorge, as the gorge is called, Princess Toadstool reads on her map that the gorge is at least three miles deep; this information disheartens Luigi, who says that maybe they should stop their journey to find Sheldon and just turn back.

Mario, disregarding Luigi's comment, points out a nearby, rather dangerous looking rope bridge, which can be used to cross George's Gorge. Saying that there is no warning sign on the bridge, which Mario tests to see if it is solid, Mario beckons Luigi, Toad and Princess Toadstool to cross the bridge with.

Fortunately, the bridge, the other end of it still being attached to land, simply swings over to the other cliff face of George's Canyon, with Mario, Luigi, Toad and Princess Toadstool hanging on to it. Mario, optimistic, says that all that he, Toad, Luigi and Princess Toadstool need to do is use the bridge as a ladder to climb to the other end of George's Gorge. Unfortunately, before Mario's plan can be enacted, Luigi points to several incoming Albatoss carrying Bob-Ombs; under the orders of their leader, the Albatoss drop their Bob-Ombs directly on to Mario, Luigi, Toad, though they miss Princess Toadstool. 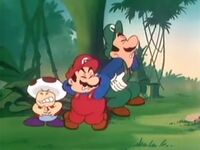 Mario, Luigi and Toad furiously scratch themselves after being hit with Koopa Strength Itching Powder.

Instead of exploding though, the Bob-Ombs simply release a white powder, which King Koopa reveals is Koopa Strength Itching Powder, which will make Mario, Luigi, Toad and Princess Toadstool itch so much that they will eventually lose their grip on the bridge and fall into George's Gorge. As King Koopa leaves to get to Sheldon, Mario, Luigi, Toad and Princess Toadstool, with the latter three itching non-stop, notice several Albatoss brandishing Bob-Ombs approaching.

As Mario begins to scratch himself, he notices a particularly big Albatoss approaching from below. As the Albatoss nears, Mario jumps onto its back and, after threatening the Albatoss, has it allow his friends on it's back. After the Albatoss picks up Toad, Luigi and Princess Toadstool, Mario commands it to bring him to Sheldon, which the Albatoss reluctantly does.

Down in the Amazon Forest, King Koopa, who is being carried by his Shyguy henchmen and being guarded by several Birdo, begins to gloat about his evil plan. As King Koopa continues to gloat, he is interrupted by a Shyguy, who points-out Mario, Luigi, Toad and Princess Toadstool, who are riding the Albatoss overhead. King Koopa, enraged, begins to brutalize his minions before commanding a nearby Birdo to fire an egg at Mario, Luigi, Toad and Princess Toadstool.

Doing as it's told, the Birdo fires an egg, which splatters all over it's Albatoss target's face. The Albatoss, blinded, begins to plummet to the ground and crashes into several trees, throwing Mario, Luigi, Toad and Princess Toadstool off it's back. Princess Toadstool, having been knocked unconscious by the crash, wakes-up to find Mario, Luigi and Toad scratching themselves crazily, being almost unable to move due to King Koopa's Koopa Strength Itching Powder.

Elsewhere, in a tree-top village, several tribal Mushrooms are in the midst of crowding around a large hut atop a tree. Suddenly, a man wearing a large, wooden mask leaps from the treehouse and begins to dance as a nearby native named Butterfingers sets down several stools. Eventually finishing his dance, the man removes his mask, revealing himself to be Sheldon; giving his mask to Butterfingers, Sheldon calls forward a nearby, yellow-capped Mushroom native.

As the native sits on a stool, Sheldon begins to ask him a series of questions, such as if he ran around the village seven times backwards, drank a blue potion, swam in a pink potion and danced The Funky Chicken on top of a grass hut. Answering yes to all these questions, the Mushroom is told by Sheldon that he is cured of whatever ailed him. After sending the Mushroom away, Sheldon calls upon Butterfingers to send him his next patient; after saying this though, Sheldon notices King Koopa and several Shyguys before him. As all the nearby Mushrooms flee, King Koopa sends his Shyguy minions after Sheldon, who they wrestle into a sack.

On a large, stone structure in the Amazon Jungle, King Koopa is in the midst of telling Sheldon, who is still in the sack and surrounded by two Piranha Plants, to make him a powerful potion. It is only after King Koopa threatens to feed him to the two Piranha Plants that Sheldon decides to create a potion for King Koopa and, removing himself from the sack he was in and grabbing his sack of ingredients, begins to create a potion in a nearby cauldron. Pouring several ingredients into the cauldron, Sheldon succeeds in creating a potion, which releases a large amount of white smoke.

Atop the stone structure, Sheldon is in the midst of adding a variety of ingredients to his potion, which includes everything herbs to four left legs from a right-handed centipede. King Koopa, having become irritated by the amount of time it is taking for Sheldon to create a potion, accuses him of stalling him. After being accused of this by King Koopa, Sheldon reassures him that the potion is completed.

Back at the village of Sheldon and Butterfingers, Mario, Luigi and Toad are sprawled out on the ground, having become to exhausted to scratch their itches. Suddenly, Princess Toadstool, Butterfingers and Sheldon appear, with the latter claiming to have an antidote. Removing the cover from a box he is holding, Sheldon reveals that his antidote is nothing more than spaghetti, which Mario, Luigi and Toad grab and begin to devour.