"Quest for Pizza" is the thirty-seventh episode of The Super Mario Bros. Super Show! Its corresponding live-action segment is "The Painting". It is the first episode of the show where Luigi is the main character instead of Mario. 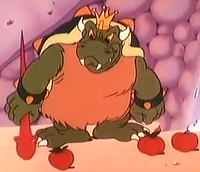 Mario, Luigi, Princess Toadstool and Toad arrive in Caveman Land searching for Mugga the Medicine Woman, who they hope will set the Mushroom Kingdom free. But King Koopa shows up first, and is now causing dinosaur-sized trouble. Almost immediately, they encounter a Mousersaurus Rex. Their attempts to flee the pursuing creature are thwarted by a Birdo-riding King Koopa, who introduces himself as Alley Koop. When Mario and the gang run in a different direction, Alley Koop tosses a red, poisonous snake that proceeds to pursue the Mario Bros. When the Brothers trip on a bone in the ground, the snake bites Mario in the leg, causing him to fall unconscious. Luigi and the others run to Mario's side and remove the snake, but cannot get a response from Mario. Alley Koop, the Mousersaurus, and a group of spear-wielding Koopa Troopas arrive to defeat the remaining protagonists. When the group finds themselves cornered in front of a waterfall, a caveboy in from a vine and tells them in his own language to get behind the waterfall, away from the sight of their pursuers.

Behind the waterfall, the gang discovers cavemen and Mugga, who the Princess hopes can help Mario. Mugga is shocked and disgusted by Mario's poor state, and shows the group a hieroglyphic depicting the unconscious Mario. Luigi, wanting instead to help the real Mario, attempts to revive him with a number of his favorite foods, including pepperoni cheesecake, a meatball sandwich, garlic ravioli, and prosciutto spaghetti. All of these fail to wake him up, and Luigi becomes inconsolable and starts crying after realizing that he is unable to wake his brother up. Mugga, trying to comfort Luigi, mutters the word "pizza", to which Luigi brightens up. Mugga then shows Luigi the rest of the hieroglyphics, which depict Luigi giving pizza to Mario. Luigi, realizing that this is the cure, decides to order take-out, but Toadstool informs him that there are no pizza parlors in the primitive Caveman Land, and that they will have to make their own.

To get the milk necessary to make the cheese for Mario's pizza, Luigi goes to a Cowazaurus, using a stepladder to reach its udders. The beast's tail whips the ladder from under Luigi's feet, causing him to grab onto an udder. This squirts all of the milk they need into a conveniently-placed bucket. The Cowazaurus falls in love with Luigi, who now has to be rescued by a vine-swinging Toad. At a large tree, Luigi wonders if ground acorns would be compatible with a pizza. Right after Toad doubts Luigi's theory, a giant prehistoric squirrel confronts Luigi as he is hoarding the acorns. As the group is sent fleeing from the colossal rodent, Toad reminds the others that all they need is tomatoes for the pizza sauce, which should be easy to achieve compared to the previous ingredients. At a tomato patch, the group is discovered by Alley Koop and his gang, forcing them to take whatever ingredients they have behind the waterfall. Unfortunately, a trail of tomatoes is left behind, allowing Alley Koop to discover where the group keeps hiding out. As Luigi bakes an admittedly mediocre pizza, Alley Koop's Mousersaurus ambushes the waterfall with a giant log, flooding the secret city and ruining both the pizza and the fire. A triumphant Alley Koop is now sure of Mario's imminent doom.

It is discovered that the pizza survived the flood, but Luigi proclaims that it is not a pizza until it is cooked. With a char-covered stick from the ruined fire, Mugga draws a Fire Flower on her wall, informing everyone (through a translating Toad) that Alley Koop has a Fire Flower, but keeps it under heavy guard. Luigi then figures that if they can retrieve this Fire Flower, Mario can be saved. Alley Koop is already aware of Luigi's plan, and enlists his minions to stop him. At the end, Luigi gets the Fire Flower and turns into Fire Luigi and defeats Koopa when he lands in the marsh. Luigi is worried that the time is almost up and Caveboy finally tells the three to take a shortcut. Then, they finally cook the pizza to wake Mario up. After waking up Mario, he stuffs the whole pizza in his mouth and says, "Only one pizza?", as Luigi starts to talk in caveman language, Toad and Princess Toadstool laugh as Mario is embarrassed.

The error in which the Mousersaurus has his face colored maroon like his body.