On Her Majesty's Sewer Service

"On Her Majesty's Sewer Service" is the twenty-second episode of The Super Mario Bros. Super Show! Its corresponding live-action segment is "9001: A Mario Odyssey". This episode is a spoof of the James Bond series of films and books, with the title referencing On Her Majesty's Secret Service and the overall story being a parody of Goldfinger.

One night in the streets of Spy Land, James Blond is searching for Koopfinger, as he had just uncovered Koopfinger's latest plot. However, when James Blond runs into Koopfinger, Koopfinger points a magic ring at the secret agent, turning him to stone.

The next day, Mario, Luigi and Princess Toadstool are sitting down to lunch at an Italian restaurant. Before Mario can thank Princess Toadstool for taking them out to eat, she pulls a hidden lever, sending their entire table down a shaft. As they descend, Princess Toadstool explains that they're going to Super Spy Headquarters because James Blond has been turned to stone, and the brothers are needed to save him.

At the bottom of the shaft, the trio ends up in an underground complex, where they are greeted by Secret Agent N. Agent N shows Mario and Luigi to their new Spymobile, which Luigi comments looks like an old plumber's truck. But Agent N tells him that it packs more firepower than a battleship. Agent N then shows Mario and Luigi their new equipment, including a wrench phone, an exclusive drain cleaner, an atomic screwdriver, and, as Mario finds out, a laser drill.

At that moment an alarm goes off, prompting Agent N to bring up a monitor. Upon doing so, Fort Hard Knox is shown, which Agent N comments is where all of Spy Land's Gold Coins are kept. The monitor then shows Koopfinger driving towards the treasury in a limo along with his goons Mouser, Tryclyde and a Koopa Troopa (who are all buff). Despite Luigi's cowardice, he and Mario head out to stop Koopfinger.

Meanwhile, Koopfinger's group arrives at the entrance to Fort Hard Knox, which Koopfinger blasts open with a Bob-Omb. With no one around to stop them, the gang proceeds with stealing all the Gold Coins.

Mario and Luigi reach Fort Hard Knox just as Koopfinger drives off, and they head after him in their Spymobile. Upon activating the plumber pulsion, they are able to speed up towards Koopfinger. The Koopa Troopa spots the Spymobile gaining on them, and Koopfinger remarks that it has to be the Mario Bros.. Koopfinger pushes a button that opens a compartment in the back of the truck with a Snifit in it that shoots away at the Spymobile. It doesn't work, as Luigi points that the glass is Snifit-proof.

Mario orders Luigi to fire the plumber missiles (two plungers) at the Snifit, knocking it out. Koopfinger then releases an Albatoss carrying a Bob-Omb, but Luigi takes care of it with the plumber gun (a shower head). Fed up with the Marios' antics, Koopa radios for a Birdo. Soon enough, a large Birdo with dragon wings comes swooping down from the sky, picks up the Spymobile, and flies off to Koopfinger's hideout. 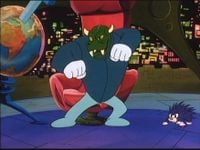 Later on at Koopfinger's hideout, Mario and Luigi have been cuffed to a board in Koopfinger's office. Mario tells Koopfinger to let them go, but Koopfinger tells him to shut up, and pushes a button, activating a game known as the Wheel of Misfortune from behind a panel, complete with hostess Vampa White.

Vampa explains the simple rules of the game: She'll spin the wheel to determine the Mario Brothers' fate. Vampa spins the wheel and it lands on "Tunnel of Doom". Vampa then pulls a lever, dumping Mario and Luigi in an underground tunnel. Luigi wonders why they call the place the Tunnel of Doom, when a Goomba starts chasing them towards a patch of Piranha Plants. Mario and Luigi leap over the Piranha Plants, while the Goomba follows. On the other side, a Spark approaches them. Trapped between a rock and a hard place, Mario pulls out his Super Spy Hose Nozzle and Mini-Plunger, which he uses as a grappling hook to escape from the tunnel with Luigi.

Mario and Luigi drop into Koopfinger's office from above, announcing that they're there to stop him. Koopfinger orders Mouser, Koopa Troopa and Tryclyde to attack Mario and Luigi. While Mario fights Mouser and Tryclyde with the atomic screwdriver, Luigi fights Koopa Troopa with a wrench, though it doesn't hurt him. Mouser throws his bowler at Mario, but it misses, knocking out Tryclyde and Koopa Troopa. Vampa White blows a fireball kiss at Mario, but he deflects it with his screwdriver and it hits Mouser. Vampa tries to get away from the fireball, but she gets caught on the Wheel of Misfortune, spinning it in the process.

Koopfinger tries to get away, but Mario and Luigi block his path. The spinning wheel lands on the space "Koopa Kaput", which Mario points out, but Koopgfinger pulls out a Magical Potion, which he uses to escape through a Warp Zone. Although he gets away, Mario points out that Koopfinger is now gone from Spy Land.

Back at Secret Spy Headquarters, Agent N explains that James Blond is back to normal because Koopfinger is gone. Mario then smells pasta from the next room, and goes over to eat it. Agent N warns Mario that it's no ordinary pasta, but he's too late, as it blows up in Mario's face. Agent N explains that the pasta was his new spaghetti bomb, but Mario doesn't mind, because he mentions that he loves spicy food.