Mighty McMario and the Pot of Gold

"Mighty McMario and the Pot of Gold" is the twenty-seventh episode of The Super Mario Bros. Super Show! and its corresponding live-action segment is "Heart Throb". 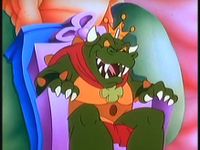 Mario, Luigi, Princess Toadstool and Toad are in the Shamrock Kingdom, where they have already met up with a leprechaun by the name of Murphy. Murphy is upset because King Koopa had taken over his homeland and stolen his Pot of Gold Coins, which is causing all of his good luck to turn into bad luck. As Murphy puts it, everyone in Shamrock Land is suffering from the curse of O'Koopa. Toad tells Murphy that he and his friends will defeat King Koopa for him, but Mario suggests that they stop and eat lunch first. Mouser, who had been eavesdropping on the heroes, decides to tell their plans to King O'Koopa.

Mouser heads to King O'Koopa's castle, where he tells the king himself that Mario and his friends have arrived in Sharmock Land. Upon being told, King O'Koopa proposes to throw a Kooper-duper welcoming party for them.

Meanwhile, Mario and his friends have stopped to eat lunch at the Shamrock Inn, where Murphy serves Mario a plate of corn beef and cabbage cannelloni. Before Mario can take a bite, the bench he is sitting on breaks. When Mario sticks his fork into the pasta, it goes flying across the room onto a window sill. Mario tries to go after his pasta, but he slips on some sauce and slides into a door. Murphy tells Mario that it is his bad luck that caused Mario to lose his pasta, and labels himself as a jinx.

When Mario tries to grab the cannelloni again, it goes flying out the window, and lands on the head of King O'Koopa, who is surrounded by Mouser and a group of Koopa Troopas. Mario tries to keep the Koopas out of the Sharmock Inn by holding the door shut, but the Koopa Troopas manage to break in anyway. Toad and Luigi toss the pot of cannelloni onto several Koopa Troopas. Mario then manages to knock over a row of Koopa Troopas by swinging into them from a chandelier. Murphy tries to help Mario by swinging from the chandelier as well, but his bad luck causes it to break away from the ceiling, and the two of them crash into Luigi, Princess Toadstool and Toad.

Outnumbered by the Koopas, Toad suggests that they escape from the Inn through a window. They hide in a tree, where they are not noticed by the Koopa Troopas, who run past them. Mario comments about never having had such bad luck before, and Murphy whines about how he needs his Pot of Gold Coins back to break the curse, just as he causes the branch everyone is on to break and crash to the ground.

Suddenly, it starts to rain, and Murphy begins to worry. Princess Toadstool tells Murphy that a rain storm is not a horrible thing, but Murphy fears that the rain will not stop, and will eventually flood all of Shamrock Land. With that said and done, Princess Toadstool assures Murphy that they will get his Pot of Gold Coins back.

Murphy leads the heroes to King O'Koopa's castle, and reveals a secret entrance to them. However, Mario tells Murphy to stay behind, and the leprechaun feels rejected until Mario and Princess Toadstool encourage him to stand guard outside. Mario's group sneaks into the dungeon, where the Pot of Gold Coins is being semi-guarded by a group of Beezos. Mario comments that the pot is hooked up to a bell, which will go off if the pot is touched. However, Toad holds the bell's clapper in place, which stops it from ringing when Mario moves the Pot of Gold Coins.

Mario accidentally trips and spills the coins, and he scrambles to get them back in the pot. Murphy, wanting to know what is taking the other's so long, figures that the others are in trouble, and goes in after them. Murphy's presence causes Mario to spill the coins again, and trip into the bell. Before they can do anything, the heroes are all trapped in a cage, just as King O'Koopa shows up to mock them.

In the dungeon, Mario questions the guards about when they are going to get dinner, but Murphy tells him that there are no guards around that are going to hear him. Mario gets the attention of two Koopa Troopas by bashing a stool against the ceiling. When they enter the cell to see what is going on, Mario bashes the ceiling again, causing several bricks to fall down and crush the Koopa Troopas. With the guards out of the way, all that they need to do now is rescue Princess Toadstool and Murphy's coins. Murphy then looks out a window, where he sees that a nearby dam is starting to flood due to the rain.

When King O'Koopa is informed that Mario escaped from the dungeon, he opts to hide it elsewhere. As he leaves, he demands for Mouser to guard Princess Toadstool while he is gone. Toad and Luigi then appear and taunt Mouser, who chases after them with two Koopa Troopas. With Mouser out of the way, Mario tells Murphy to stay behind, while he uses a hacksaw from his All Purpose Portable Plumber's Helper to try and cut through Princess Toadstool's chain.

Meanwhile, Mouser and the Koopa Troopas chase Luigi and Toad through a hallway in the castle, and come to an area with several doors on both sides. A Scooby-Doo-esque chase scene occurs as both groups chase each other through the doors. Although Luigi and Toad manage to tire out Mouser and the Koopa Troopas, they crash into an opened door, where King O'Koopa is holding Murphy.

Just as Mario manages to cut through Princess Toadstool's chain, King O'Koopa appears to show them that he is holding their friends hostage. King O'Koopa gloats about how he is having a lucky day, but Mario warns him that Sharmock Land will be flooded if Murphy doesn not get his gold back. King O'Koopa does not care, because he plans on just sailing away with the gold in his yacht.

Murphy comments that they have lost, because there is no way to fight his bad luck. Mario then realizes that instead of fighting Murphy's bad luck, that they should use it to their advantage, and tells Murphy to be King O'Koopa's "best friend". Murphy hugs King O'Koopa's leg, causing him to stumble back into a wall, where an ornamental mace falls onto his head. When King O'Koopa shakes Murphy off of his leg, he stumbles into a statue of himself, which breaks and falls on top of him.

King O'Koopa attempts to blast Murphy with a fireball from his Shamrock scepter, but the fireball goes flying around the room, where it lands in the nearby powder magazine, setting off the fuse of a pack of dynamite. King O'Koopa fails as stopping the fuse, and all the explosives go off, which blow his entire castle into the air, and back down onto his yacht, crushing it.

Murphy tries to hug King O'Koopa again, who is now afraid of the jinx. Mario tells King O'Koopa that Murphy will remain his best friend as long as he stays in Shamrock Land, and King O'Koopa exclaims that the whole thing just is not worth it. Just as he lets Murphy have his coins back, King O'Koopa backs up too far, and falls down into the moat.

When Murphy gets his gold coins back, the rain stops, and a rainbow appears in the sky. Murphy comments that the Shamrock Kingdom is safe again, and that he is no longer a jinx. Murphy then gives Mario a hug, and Mario is relieved when nothing bad happens. Just then, the floor underneath Mario cracks, and he falls through it. When the others look down the hole, they see that Mario was lucky enough to land at table, where he eats away at a lunch which has already been prepared.