Raiders of the Lost Mushroom

It has been requested that more images be uploaded for this article. Remove this notice only after the additional image(s) have been added. Specifics: there is a lot of text here

"Raiders of the Lost Mushroom" is the forty-ninth episode of The Super Mario Bros. Super Show!. Its corresponding live-action segment is "Cyrano de Mario". The title is a reference to the Indiana Jones 1981 film Raiders of the Lost Ark. 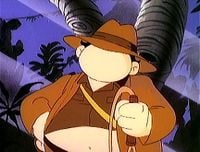 Mario, Luigi, Princess Toadstool and Toad have traveled to Jungleland in a red hot air balloon, complete with Mario's trademark "M" emblem plastered on it. Their reason for traveling to Jungleland is that they hope to find a magical statue known as the Lost Mushroom. However, according to Mario, King Koopa is looking for it as well.

Still flying in the balloon, Princess Toadstool tells her friends that the Lost Mushroom can grant the wishes of whoever possesses it, and that they must find it before King Koopa does himself. Toad points out that it won't be easy, as they don't know where to start looking. Before they can continue, Luigi points to a nearby, flying Albatoss. Toad remarks that the Albatoss works for King Koopa, and before any of them can react, the Albatoss swoops down and pierces a hole through the center of the balloon, causing it to deflate and crash down towards the ground.

Having survived the crash, the group feels relieved, until they discover that they have actually crashed into a quicksand pond, which they slowly start sinking into. After making a wry comment, Toad finds himself victim to a mysterious whip that wraps itself around his arm and it mysteriously put him on to dry land. As that happens, Toad sees that the whip belongs to an explorer. The explorer introduces himself as Indiana Joe, the self-proclaimed greatest treasure hunter in Jungleland. After Indiana Joe agrees to find the Lost Mushroom for Princess Toadstool, he uses his whip to rescue her from the quicksand, along with Mario and Luigi. 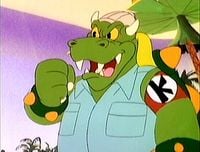 Meanwhile, King Koopa, who is with Mouser, Tryclyde and Koopa Troopa, has been spying on the heroes through binoculars from atop a cliff. King Koopa comments that Indiana Joe is going to lead them to the Lost Mushroom, and that he knows the location of every hidden treasure in Jungleland, as well as every shortcut leading to them. When Mouser whines that Mario's group will reach the Lost Mushroom before they do, King Koopa comments that the statue was left to him by his Great-Great Grandkoop, and is rightfully his. Addressing King Koopa as Kolonel von Koop, Tryclyde asks what they can do about it. Kolonel von Koop responds by saying they will follow the other group and let them find the Lost Mushroom, so that they can simply take it away from them. Mouser, Koopa Troopa and Tryclyde nervously remind Kolonel von Koop that they would be stealing, so Kolonel von Koop has to remind them that they are supposed to steal since they are bad guys, and smacks them all with his whip.

Inside the Temple of Koopa, Mario's group proceeds with their search for the Lost Mushroom. When Princess Toadstool asks what Indiana Joe could possibly be afraid of, the ceiling behind them caves in, blocking their way out. Suddenly, a fireball goes flying over their heads, which they manage to dodge by ducking. Toad then points out the Fryguy that shot the fireballs, and the group proceeds to run away. While fleeing from the Fryguy, the group runs towards a large Cobrat in a glass bowl that they barely manage to leap over. Although the Fryguy continues to chase the group, they eventually slip into another chamber and block the entrance with a boulder, stopping the Fryguy's pursuit. 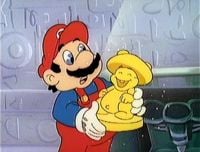 Upon sealing off the chamber, Princess Toadstool points to the Lost Mushroom, which is lying atop a pedestal before the group. The group runs up to the Lost Mushroom and Mario picks it up. Luigi then points out that all they need now is a way out of the Temple of Koopa, and Mario inadvertently wishes for a trap door. The Lost Mushroom responds to Mario's wish by opening a panel in the floor beneath the group. Upon falling through the floor, Mario's group winds up being spat out at the entrance to the Temple of Koopa. Before they can celebrate their victory, Kolonel von Koop steals the Lost Mushroom right out of Mario's hand. Kolonel von Koop orders Mario's group to put their hands in the air, while Tryclyde opens his mouths, and Mouser and Koopa Troopa each pull out a small Cobrat akin to a gun, which they aim at them.

Later, Kolonel von Koop's group has led Mario's group to a caged tree hut, where they are holding them prisoner. Mario demands to be released, but Kolonel von Koop sarcastically responds at his threat and laughs with his henchmen. Kolonel von Koop's group leaves the tree hut, and leaves Mario's group trapped inside. As soon as Princess Toadstool wonders what Kolonel von Koop plans on doing with them, a trap door opens up, and a Shyguy Lion pops out, which Toad assumes will eat them for lunch. Bracing his fear, Mario asks for Luigi to lend him his plumber's snake, which he uses as a whip to tame the Shyguy Lion. Mario then orders the Shyguy Lion to free them, and it crashes through the door, providing them with a way out. Princess Toadstool remarks that they still need to find a way to defeat Kolonel von Koop. Toad points out that they can't do it alone, as the Lost Mushroom makes Kolonel von Koop too powerful. Mario suggests that maybe Indiana Joe can help, and that they can help him overcome his Koopaphobia, so the group sets off to find him.

Mario's group arrives at Indiana Joe's hut, and discover from a sign hanging next to his front door that he's offering a babysitting service. Entering the hut, they see Indiana Joe trying to look after three whiny Mushroom kids. Mario asks Indiana Joe why he became a babysittier, and he responds by saying that he can't be a treasure hunter due to his Koopaphobia, so he went into babysitting instead. Princess Toadstool asks for his help, and tells him that they can't defeat Kolonel von Koop alone. Unable to stand the kids' behavior, he puts them down, joins up with Mario's group, and comments that while Kolonel von Koop may be scary, he's nothing compared to looking after bratty kids. Indiana Joe then instructs Mario's group to leave as the kids proceed to throw toys around the hut.

Back at his hut, Indiana Joe thanks Mario's group for helping him conquer his Koopaphobia, and proceeds to take down his babysitter sign, which Toad in turn tosses into the nearby pond. Princess Toadstool then asks as to what happened to the Lost Mushroom, and Mario, who is inside the Indiana Joe's hut with it, wishes for the place to be filled with pasta. As noodles start to fill up the entire hut, none of the others can believe what they are seeing, but Mario is thrilled, and comments that he and the Lost Mushroom are going to get along just fine.

This episode was based heavily on the original Indiana Jones movie trilogy, aside from the title. The third movie, Indiana Jones and the Last Crusade was released a few months before the airing of the episode, and is most likely the impetus for its production.

The finalized model sheet, featuring Indiana Joe without a face.