"Butch Mario & The Luigi Kid" is the third episode of The Super Mario Bros. Super Show!. Its corresponding live-action segment is "All Steamed Up". 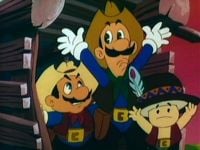 Mario, Luigi, and Toad are held at point-blank-range by Sheriff Mouser

In the Wild West, Mario, Luigi, and Toad begin to search for Princess Toadstool, who has been kidnapped by Kid Koopa and taken into the Wild West. While traveling through the desert, Mario and Luigi notice a wanted poster on a nearby cactus with a hat on it. Looking at the wanted poster, Toad notices that it has Mario and Luigi displayed on it and the reward for their capture is 10,000 gold pieces.

Hearing about the reward money, the cactus the poster is attached to suddenly springs to life, revealing itself to be a Pokey. The Pokey, desiring the reward, begins to attack Mario and Luigi, only to be stopped when it has a plunger thrown at and affixed to its face.

In an abandoned mine shaft, Kid Koopa begins to taunt the captured Princess Toadstool, who is sealed in a cage. Koopa proceeds to give the Princess her food, three beans, and then leaves her, planning to starve her.

Running from Mouser and his minions, Mario, Luigi, and Toad come to a dead end: a flowing river. With Mouser approaching quickly, Mario decides to use several logs flowing down the river as stepping-stones to cross it. After Mario crosses the river, Toad does the same, as does Luigi, who narrowly makes it.

Seeing Mario, Luigi, and Toad cross the river, Sheriff Mouser orders his Snifit minions to do the same. Unfortunately, the Snifits fail to make it across and fall over a waterfall, leaving Mouser to cry over and mourn their fate as well as his failure to capture the trio.

Later, at a small town, Kid Koopa is in the process of reprimanding Mouser for his failure in capturing Mario, Luigi, and Toad. After having several threats thrown at him, Mouser begins trying to calm down Koopa, saying he will hire every available bounty hunter to track down Mario's group.

In the desert, Mario, Luigi, and Toad (now wearing cowboy outfits), having somehow gotten several Ostros to be their steeds, come across another wanted poster, this one saying Mario and Luigi are wanted for 30,000 gold pieces. As Mario and Luigi talk about their unfortunate fate, a nearby Tweeter, seeing the wanted poster, snickers to itself and flies away.

Reaching the mine shaft where the Princess is being held, Mario, Luigi, and Toad begin to enter the mine, only to be surrounded by Sheriff Mouser and his minions. Wielding a Cobrat, Mouser suddenly gets in an argument with the Tweeter from before, who wants its reward money for telling Mouser of Mario, Luigi, and Toad's location.

With Mouser distracted, Mario, Luigi, and Toad, after knocking aside several Snifits, steal their Ostros, and run. Mouser, after lighting the fuse of a Bob-Omb, throws it at a nearby boulder, releasing it and causing to roll down at Mario's group. Running from the boulder, Mario's group find themselves in the town, with an army of Cobrat-armed Pokeys in front of them. Seeing a nearby building advertising free Italian food, Mario, Luigi, and Toad manage to run inside it, dodging the boulder, which bowls over the Pokey army.

Inside the building, Mario, Luigi, and Toad are horrified to find Kid Koopa in it. A taunting Koopa proceeds to force them into a nearby prison cell and crushes the cell key in his hand.

Coming up with a plan, Mario yells that he is dying of thirst. Mario's cries eventually attract an annoyed Sheriff Mouser, who proceeds to drink a glass of water in front of the brothers, trying to be cruel. As Mouser finishes his drink, he notices the Mario Brothers playing a game of patty-cake. Wanting to know what the brothers are doing, Mouser is shoved by the two and has his hat knocked off, which Toad quickly hides himself under. Claiming to be delusional of thirst, the brothers are let off with a warning by Mouser, who leaves the building and enters a nearby, Koopa Troopa-filled bar.

Mouser, after setting his hat and Toad down on a table, goes to get a drink. With Mouser gone, Toad sees a bag of Bob-Ombs, which he grabs, then quickly leaves the bar. Outside, Toad lights the fuse of a Bob-Omb and sends it into the bar, where it blows up.

Toad runs to the prison that the Mario Brothers are held in and blasts the wall down, freeing, as well as dazing them. Seeing that the brothers are free, Sheriff Mouser sends a brigade of Koopa Troopas out to capture them. Mario, Luigi, and Toad manage to evade the Koopa Troopas and, taking some nearby Ostros, travel to the mine that Princess Toadstool is being held in.

Traveling into the mine, Mario, Luigi, and Toad bump into a wall; using a Bomb Plant plucked from the ground, Toad blows up the wall, with Luigi caught in the blast. Mario, after happily seeing that Luigi survived the blast, rushes him outside for some fresh air, Luigi having inhaled a large amount of dust.

Outside, Mario, Luigi, and Toad find themselves surrounded by Kid Koopa and his Koopa Troopas. Koopa suddenly challenges Mario to a duel, with a nearby Birdo's cheeps acting as the countdown. Suddenly, Koopa pulls out a small Piranha Plant before the countdown is done and has it shoot a fireball at Mario's group.

As Koopa prepares to throw Bob-Ombs into the pit, the Mario Brothers, having reworked the piping system in the pit, send a blast of water upward, raising themselves, Toad, and Princess Toadstool to the surface, as well as washing Kid Koopa and his Koopa Troopas away. 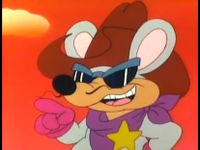 "Sheriff Mouser to you, you despicable felons!"

“Then there's breakfast, lunch, and dinner for the rest of the week!”
—Kid Koopa
“Sheriff Mouser to you, you despicable felons!”
—Mouser
“Felons? Yo! I never fell on nobody. I'm uh...”
—Luigi
“Under arrest, apprehended, and busted!”
—Mouser
“First you have to catch us!”
—Mario
“I'm no frog. I can't even swim.”
—Toad
“Yo, I need a doctor.”
—Luigi
“I need a pizza.”
—Mario
“We can use these Bomb Plants to get inside.”
—Toad