"King Mario of Cramalot" is the second episode of The Super Mario Bros. Super Show!. Its corresponding live-action segment is "Day of the Orphan". 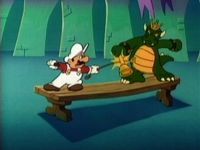 Super Mario, battling King Koopa over the fate of Cramalot.

Mario, Luigi, Toad, and Princess Toadstool are traveling through Cramalot while searching for Mervin the magician, whom the Princess believes can free her kingdom from King Koopa's tyranny. While traveling, Mario suddenly hears some bee-like buzzing, which leads him to believe a beehive and thus, bees, are nearby. Mario and Toad start thinking about food until the latter notices that unfortunately, it turns out that the buzzing is not being caused by bees; instead, it is being caused by a nearby swarm of Beezos, who are preparing to attack.

Narrowly dodging the Beezos, Mario grabs a nearby Tomato and hurls it at their leader; after being hit, the Beezo, angry, orders another attack. Before the Beezos hit Mario, Luigi, Toad, and Princess Toadstool, though, a man dressed as a wizard suddenly appears and, with a blast from his wand, disintegrates the Beezos.

Princess Toadstool suddenly realizes that the man who saved them must be Mervin; the man says he is indeed Mervin and invites Mario, Luigi, Toad, and the Princess to his cave home. In his cave, Mervin proceeds to tell the group that the Beezos that attacked them were sent by King Koopa.

Mervin then tells a surprised Luigi that King Koopa became the new king of Cramalot when, after the old king died, he simply marched into the castle and took over. Princess Toadstool, after hearing Mervin's story, asks if there is anything they can do to help him free Cramalot. Mervin says there is an old legend that says that the one who can pull the golden plunger from the sacred sink of Cramalot will be able to defeat King Koopa and save Cramalot.

At his recently claimed castle, King Koopa, after hearing from one of his somewhat dimwitted Koopa Troopa soldiers that Mario pulled the golden plunger out of the sacred sink of Cramalot, sends several of his minions out to get rid of Mario.

In the town square of Cramalot, Mario, Luigi, Princess Toadstool, Toad, Mervin, and several villagers are in the middle of celebrating Mario as the new king of Cramalot. Suddenly, King Koopa and a brigade of Koopa Troopas appear; before anyone can react, King Koopa orders several Koopa Paratroopas to dump a net on them, trapping them.

Using his golden plunger, though, Mario is able to cut a hole in the net, freeing himself and everyone else; unfortunately, Mario is unable to fight King Koopa, as the Koopa king has taken Princess Toadstool hostage, threatening to let his Beezo minions attack her if Mario does not cooperate. Taking the golden plunger, King Koopa has Mario, Luigi, Princess Toadstool, Toad, and Mervin to the dungeon of Cramalot Castle.

Before Mario, Luigi, Princess Toadstool, and Toad are crushed or drowned, Mervin suddenly appears and, using his magic, transports everyone out of the cell and into the "forest of perpetual night and terrible dangers".

Suddenly, lightning strikes a nearby lake, causing a hand holding a plumbing snake to rise from the water. Mervin says that the plumbing snake is Excalibur; suddenly, the hand tosses it to Mario. Grabbing Excalibur, Mario is suddenly turned into Super Mario. With his new powers and confidence, Mario has Mervin lead him and Luigi, Toad, and Princess Toadstool to Cramalot Castle.

Arriving at the castle, Mario notices that the drawbridge of the castle is up and decides to send a resistant Luigi through the castle moat to lower it. After some trouble with hungry Trouters, Luigi manages to reach the drawbridge.

Inside the throne room of the castle, King Koopa begins to gloat about how he is now officially king of Cramalot, now that he has the golden plunger. Suddenly, Mario, Luigi, Toad, Princess Toadstool, and Mervin appear to challenge King Koopa. As Luigi, Toad, and the Princess defeat King Koopa's Koopa Troopas, Mario begins to duel King Koopa.

Battling King Koopa atop a stairway, Mario chases after him, who has swung to a balcony and begins to get the upper hand against him. As the two battle, King Koopa suddenly drops down onto a dining table with Mario following him. Grabbing a food-covered plate, King Koopa hurls it at Mario, who easily dodges it. Shortly after his minions are defeated, King Koopa himself is; losing the golden plunger, King Koopa manages a desperate escape using a Magical Potion.

With the threat of King Koopa gone, Mervin asks Mario to become the new king of Cramalot and he accepts this offer. Unfortunately, it seems the king of Cramalot has to be trim and slim as a running machine appears underneath Mario, who, not wanting to be forced on a diet, crowns Mervin as king and runs off, while the others laugh about it.