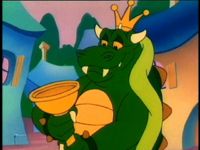 Mario, in order to defeat King Koopa, manages to pluck the Golden Plumber's Helper from the sacred sink of Cramalot, though he later has it taken from him by King Koopa. Later, when Mario duels a Helper-wielding King Koopa, he manages to free it from King Koopa's grasp with the Excalibur; what happens to it afterward is unknown.

The full extent of the Golden Plumber's Helper's power is unknown, as the only ability of it that is shown is its power to disintegrate objects.