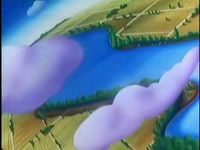 The River World is an area from The Super Mario Bros. Super Show! episode "Rolling Down the River".

The River World, as its name may imply, is filled with rivers, the largest of which seems to cut right through the land. Trouters seem to be the only fish that inhabit these rivers. The only portions of land ever seen in the River World are small beaches and woodland areas. The Mouth of the River, a gypsy-like woman who knows everything about the River World, inhabits one of these wooded areas in a caravan.