Not to be confused with Phantom.

Phantos are large, seemingly-living masks that appear in Yume Kōjō: Doki Doki Panic and Super Mario Bros. 2, where they are found guarding keys. According to the game's manual, they often guard various other treasures as well. Their name is a shortened form of the word "phantom", another word for ghost or specter, and is likely used in reference to The Phantom of the Opera.

In Yume Kōjō: Doki Doki Panic, the Phanto's expression and color scheme most resembles its original artwork; starting with the original NES version of Super Mario Bros. 2, they are given a distinctive evil grin, and subsequent remakes portray them as golden in color instead. Most of its appearances outside these games either draw from its original appearance, or else use the gold sprite from the remakes. 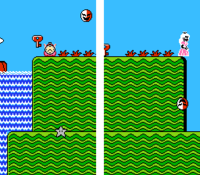 Phanto being defeated though a combination of a Stop Watch and Invincibility.

Phantos appear as semi-common enemies in Super Mario Bros. 2 and its subsequent remakes and ports, and are seen guarding keys in caves or in jars. They first appear in World 1-2. Phantos simply remain immobile and harmless until the player takes the key they are guarding, at which point one of the Phantos will animate and ceaselessly chase them; some of the remakes make this Phanto slightly different in appearance from the others. Phantos can follow the player through other screens and rooms, even including Subspace; they cannot be permanently defeated, either—a Phanto can be temporarily defeated only with the combination of a Stop Watch and a Starman, but a new one will replace it as soon as the player enters another room while carrying the key. If the player drops the key while a Phanto is chasing them, it flies away and leaves them alone until they pick up the key again; it will only give up the chase for good once the door is unlocked.

A number of immobile and harmless Phantos can be seen in Wart's room in all versions of the game. In the SNES and GBA versions of Super Mario Bros. 2, larger Phantos can be seen in the backgrounds of the key rooms; the eyes of these larger Phantos will glow red repeatedly once the key is grabbed. In Super Mario Advance, if the player drops or uses the key or loses a life, the Phanto appears to fly toward the camera as it leaves, via usage of an altered sprite that is twice as large as the original. In the GBA remake, invincibility alone is all that is needed to defeat one.

In BS Super Mario USA, Phantos can be defeated by large objects that are thrown from off-screen like Peach's Love Love FireMedia:BSSMUSA Love Love Fire.png even when they are inactive. A giant Phanto spawns according to the time in the game's built-in clock. The first appearance is in the second broadcast episode when the time is at :15. The second appearance is in the fourth broadcast episode at :07. It will chase the player even without keys involved but will not follow the player to other screens. It has difficulty tracking players that hang around the edge of wraparound screens. After one minute, it fades away.

Phantos appear in Super Mario Maker 2 in the version 3.0.0 update released on April 22, 2020. They appear as enemies in the Super Mario Bros. style, attacking players when a Cursed Key is picked up. Phantos often tend to move in erratic patterns, following the player. The sprite now glows in pink/light blue colors. Additionally, they are completely immune to the Moon, Super Stars, Spiny Shells and Dry Bones Shells. Only one Phanto can appear at a time, though multiple Cursed Keys can be held at once. Although, if another player has a key, another Phanto will appear. When entering a subarea or going through a Warp Door with a Phanto following the player, the Phanto will take a few seconds to suddenly appear in the new location. 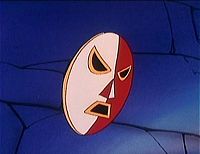 A Phanto from The Super Mario Bros. Super Show! episode, "The Ten Koopmandments".

Phantos make two appearances on The Super Mario Bros. Super Show!, with the first one making its debut in "The Ten Koopmandments". After Koop Tut had trapped Mario, Luigi, Princess Toadstool and Toad inside a pyramid, the four heroes encounter the Phanto, which proceeded to chase them until they managed to escape from the pyramid. Another Phanto made a brief cameo appearance in "Escape from Koopatraz" as a member of Judge Koopa's jury.

Sprites of Phantos, taken from Super Mario Bros. 2, are sewed on the carpets decorating the racecourse of Shy Guy Bazaar in Mario Kart 7 and Mario Kart Tour.

Phanto
Tribe: Ghost clan
Disposition: Tenacious
Game appearances: USA
Let go of the key from time to time.
He is the keeper of the key to the door. If you try to take the key with you, it will start moving and chase you wherever you go. If you remove your hand from the key, it will move away, so if it comes close to you, put the key down.

Bio: カギを守る番人。カギを持っている間、マリオを追いかけてくる。[4] (The guardian of the key. He will chase Mario while he has the key.)