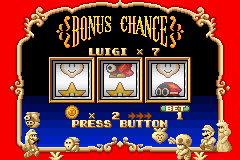 This article is about the slot machine game from Super Mario Bros. 2. For the bonus game from Yoshi Topsy-Turvy, see Bonus Chance!.

The Bonus Chance (also named bonus game, Bonus Stage[1], Slot Machine[2], and Slot Game[3]) is a minigame played at the end of every level in Super Mario Bros. 2, provided Mario or another character has collected at least one coin. If they end the course with no coins collected, the Bonus Chance screen displays but the game is immediately skipped.

The coin counter is displayed in hexadecimal. When the player has more than nine coins, letters from A to F are used instead. In Yume Kōjō: Doki Doki Panic, there are four possible symbols: Cherry, Snifit, Large Vegetable, and Small Vegetable (the types for the latter two depend on each world and have been replaced with Turnip and Starman in Super Mario Bros. 2).

The coin counter is now displayed properly. The All-Stars version introduced the lucky 7 as the fifth symbol. In the Advance remake, players can now bet more than one coin per spin to earn more extra lives (the coin amount used times the normal amount of lives gained).

Also known in the audio drama as the king's casino, play starts when the time hits :50 and ends at :53. Any lives gained will not be carried over to the next installment but turned into points after the credits. The coins are converted into 1000 giga each, which can be spent within St.GIGA's Satellaview.