Autobombs are large, gray, wheeled cannons which launch projectiles and can be ridden on. It is a personal favorite of Shyguys.[1][2] 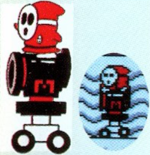 In Yume Kōjō: Doki Doki Panic, Autobombs were utilized by red Shyguys as a means of transportation and offense. They would pursue and shoot fiery projectiles at the player. It can travel down steps but not up. If the Shyguy was removed, the Autobomb will stop shooting and travel in a straight line. The player can then ride it, but not control it or pick it up. In some levels, riding an Autobomb was mandatory in order to cross large, spike-filled gaps. The Autobomb itself can be destroyed with a thrown object.

An Autobomb from The Super Mario Bros. Super Show!

In The Super Mario Bros. Super Show!, Autobombs, never referred to by name, only made one appearance, in the episode "Koopenstein"; an Autobomb first appeared in the episode when Mario, Luigi and Princess Toadstool are captured by Mouser and a group of Shyguys. Later, Toad, when surrounded by Shyguys, manages to light the fuse of a nearby Autobomb using a Piranha Plant, causing it to blast the surrounding Shyguys, creating a distraction that allowed Toad to escape.

Turbomb
Tribe: Mecha clan
Disposition: Ruthless
Game appearances: USA
Self-propelled cannon shooting fireballs
A cannon that shoots fireballs while moving. It has wheels and moves left and right. It is also possible to ride on it in motion. It has a Red Shyguy on top of its head. Its American name is Autobomb.

Bio: ヘイホーレッドが乗っている。マリオに向かって炎を発射してくる。[5] (Red Shyguy is riding on it. It shoots flames at Mario.)