Not to be confused with Robobird.

Robirdo[1][2][3] (alternatively RoBirdo[4]) is a huge, robotic version of Birdo that appeared in the game Super Mario Advance, a remake of Super Mario Bros. 2. It replaces Mouser from the original game as the boss of World 3-3. Robirdo speaks with a robotic version of the regular Birdo's voice, using a couple of her direct quotes during boss intro and upon being defeated ("How could you?!"). Its name is a portmanteau of "robot" and "Birdo".

In Super Mario Advance, Robirdo is an added member of the 8 bits, which helped Wart conquer Subcon.

Robirdo has three attacks: the first has it fire giant eggs from its mouth. The second attack is a direct charge towards the player, used after taking damage or following one of the other attacks. The player can avoid this by grabbing one of the chains hanging from the ceiling. The third attack is used once Robirdo has taken at least one hit - a Ground Pound-like jump that immobilizes the player. The only way to damage Robirdo is to throw the giant eggs back at it; it takes five hits to defeat. After it takes three hits, however, it continuously moves its head up and down when performing the charge attack, causing the player to possibly take damage when riding on top of it.

Coincidentally, the filter used for Robirdo's voice clips is similar to the one used for Metal Mario starting from Mario Kart 7, as well as Pink Gold Peach.

The ending credits depict her without her bow; this is consistent with the normal Birdo. 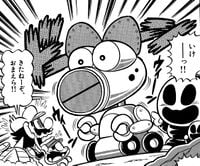 Robirdo makes an appearance also in volume 26 of Super Mario-kun. It appears in a short segment involving Super Mario Advance at the end of the chapter of the main story. The Shy Guys unleash Robirdo on Mario, but Mario defeats it by throwing a Giant Shy Guy at it.