“Little Cheepy want his mommy!”
—Cheepy, "The Bird! The Bird!" 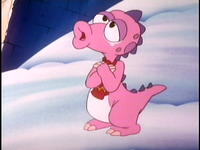 Cheepy, after being thawed out by Super Mario's fireballs

Cheepy, often referred to as Little Cheepy, is a notable Birdo from The Super Mario Bros. Super Show! episode "The Bird! The Bird!". He is depicted as a small, pink-colored Birdo wearing a scarf.

It is revealed in the episode that his mother, the Giant Birdo, had lost him and was frantically searching for him, even employing the Missing Bird Bureau to aid her. Eventually, his mother, being extremely near-sighted, mistakes Toad for Cheepy.

Later on, after King Koopa and his followers are defeated, Cheepy and his mother invite Mario, Luigi, Princess Toadstool and Toad to their home for lunch; this lunch, however, turns out to be large, talking worms.