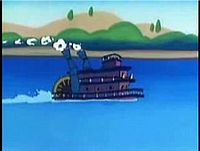 The Sinister Star is a large, dark colored steam ship owned by Captain Koopa and operated by his minions.

The Sinister Star was apparently destroyed when Princess Toadstool, having gained control of the Sinister Star's steering wheel, crashed it into a beach.