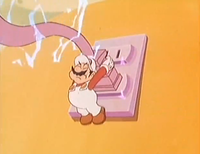 The Royal Plug is an enormous plug found in The Super Mario Bros. Super Show!. It is used to plug a hydroelectric dam, which is the source of Rap Land's electricity.

In the episode "Bad Rap", Rappin' Koopa takes over the Rap Land. This prompts Mario to pull the Royal Plug, cutting Rappin' Koopa's supply of electricity and thus breaking the hypnotic trance on the citizens of Rap Land.