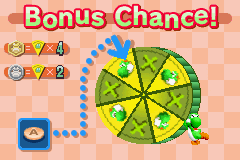 to make the wheel stop spinning. If the wheel lands on a Yoshi's head icon, Yoshi can play a Bonus Mission!. If it lands on an "X", then he loses the game.