It has been suggested that this page be moved to Spirit (Yoshi Topsy-Turvy). (discuss) 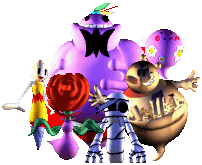 The Yoshi Island Spirits[citation needed] are characters that only appear in the game Yoshi Topsy-Turvy. Each spirit gives Yoshi a mission, and if Yoshi completes the mission, they give him a Happiness Medal. Their leader is Hongo, the book spirit. The spirits include: 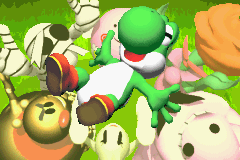 Several of the Yoshi Island Spirits celebrating Yoshi's victory in locking away Bowser.

The Spirit Who Loves Surprises is a lively spirit who gives Yoshi the power to rotate the entire world, helped him throughout the game, explained what he must do to have Yoshi Island turn back to normal, and hosted the Bonus Mission!. He was fired by Hongo, because he did not know how to keep secrets. At The Tale of Bowser's Fields, he controls a fake Bowser to attack Yoshi as a test to see if he is ready to battle with Bowser. At the end of the game, the spirit Who Loves Surprises returns to work with Hongo.

The Spirit of Cuteness loves cute things more than anything else and is very friendly. She cares very much about the Egglings and explained to Yoshi what Bowser did with the Egglings and asks Yoshi to save them. The spirit awards Yoshi with a Happiness Medal if he finds a certain amount of Egglings in each stage. She is a round, flying pink creature with white wings.

The Spirit of Greed loves money and gold and judges people on how much money they have. He only allows Yoshi to go to the next level if he gave him a certain number of Coins. He has a pouch full of his gold and money, and resembles a golden mouse. 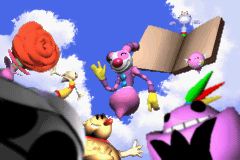 All of the spirits, seen during the ending cut-scene.

The Spirit of Power is the strongest of the spirits and likes mighty and strong people. He only allows Yoshi to go to the next level if he defeats a certain number of enemies. This trial is almost the exact opposite of the Spirit of Kindness. He resembles an obese purple genie.

The Spirit of Speed is very fast, energetic and despite being so competitive, she is very friendly. She loves to challenge others to races, and does not like people who just stand without doing anything.

The Spirit of Kindness is a benevolent and gentle spirit that likes kind people. Her tasks for Yoshi always involve defeating the least amount of enemies in a level as possible, unlike the Spirit of Power. She resembles a rose.

The Spirit of Fright likes to scare people. To satisfy himself, he sets up a giant rolling spindle with spikes to scare Yoshi. Yoshi must reach the goal and avoid being sucked in the spikes. He resembles a mummy.