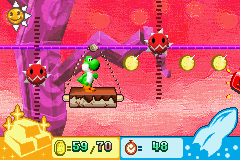 Screenshot of Yoshi with two Igashira-kuns.

Igashira-kun are round, spike-covered enemies that appear in Yoshi Topsy-Turvy. If the Game Boy Advance is tilted left or right, they will awaken and roll to the according direction, and if the Game Boy Advance is not tilted, they will not roll and will fall asleep. They deal three points of damage when Yoshi touches one. Igashira-kuns can also defeat other enemies, like Shy Guys and some that Yoshi cannot by himself, like Tap-Taps. Igashira-kuns can also be found in wire-like constructs floating in mid-air, where they regularly move across.

Igashira-kun itself cannot be defeated, but it is often used to defeat other enemies. Since its body is spherical, it rolls around when the body is tilted.[1]