"The Ten Koopmandments" is the thirty-fourth episode of The Super Mario Bros. Super Show! Its name is a pun on the Ten Commandments. 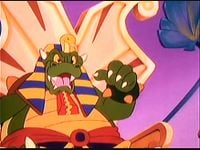 Mario, Luigi, Princess Toadstool and Toad were riding on camels on their way to Pyramid Land, as King Koopa had appointed himself pharaoh and was causing trouble for the citizens. As Mario and co. had reached a monument known as the Ten Koopmandments, they read the various Koopmandments;

Mario becomes offended after reading the sixth Koopmandment, claiming that Koop Tut has gone too far.

As the group leave in their camels, they find a nearby Mushroom village, only to find out it was deserted. Toad assumes that all the Mushroom People living there have vanished, but Princess Toadstool points out that not all of them have, as they find three of them who introduce them as The Three Mushrooms; Curly, Larry, and Momar. Princess Toadstool asks the Three Mushrooms about the whereabouts of all the other villagers. Curly tells the group that Koop Tut has kidnapped most of them, and Larry continues that they've been turned into bricks. Momar shoves his two siblings saying that he should be the one talking and then hits them by the head, hurting them. Toad asks Mario what Koop Tut could be up to. Mario tells Toad that Koop Tut's doing could be something diabolical, sinister, and not very nice.

Meanwhile, Koop Tut is admiring the construction of his colossal Koopinx, which is made entirely out of bricks that were once Mushroom People, being nearly complete. Mouser heads to Koop Tut to tell him some bad news. Angered by this, Koop Tut pulls Mouser with his magic staff, saying that he hates bad news, and even the guy who brings it. Mouser tries to change the subject by saying that it was "good news" and that he'll be rewarded with a medal for bringing it. As Koop Tut prepares to abuse him, Mouser tells him that they could take the vacation cruise of the Nile. Koop Tut asks Mouser of what will become of his Koopinx. Mouser tells him that the "great part" is that the Koopinx can't be finished; they were fresh out of bricks. Koop Tut shakes Mouser in frustration, saying that it sounded more like bad news for him and then tosses Mouser into a palm tree, leaving him disappointed that there won't be a cruise nor medal reward for him. Koop Tut commands Mouser to bring in the Koopa Pack to kidnap the remaining Mushroom People. Mouser accepts Koop Tut's command and walks off, mumbling about how there can't be anything worse other than his boss.

Later, Mario and his friends spot Koop Tut, Mouser, Tryclyde, and a Koopa Troopa on a chariot ridden by an Ostro. Mario tells the gang that there's only one thing they can do. Luigi asks if they could run for their lives. Mario tells Luigi that they should stand and fight, leaving Luigi with no other choice.

When Koop Tut and his Koopa Pack reach the village, he commands them to take over the village until they find The Three Mushrooms, who launches pie at them with a trebuchet. Mario, Luigi, Princess Toadstool, and Toad show up holding plungers, ready to take down Koop Tut and his army. Mouser, Koopa Troopa, and Tryclyde charge into their battle positions as Mario and his friends prepare to attack. When Mouser and Koopa Troopa begin to twirl their spear and sword respectively, The Three Mushrooms launch more pie at the Koopas, only for Mario, Luigi, Princess Toadstool, and Toad to be hit by the pies on accident. Noticing they've mistargeted, Momar grabs his two brothers by the nose, hurting them again. Koop Tut uses his magic staff to turn The Three Mushrooms into bricks and then trap Mario, Luigi, Princess Toadstool, and Toad in a net.

Koop Tut sends Mario and his friends into a dungeon inside of a pyramid. As Princess Toadstool commands Koop Tut to let her Mushrooms go, Koop Tut declines this, proclaiming that good bricks are hard to find. Koop Tut and his pack then leave Mario and co. trapped in the pyramid dungeon. Mario points out that a Goomba Mummy is after them, in which the gang flee from it in a dark corridor where they find a Cobrat blocking their path. Mario, Luigi, Princess Toadstool, and Toad proceed to leap over the Cobrat, along with the Goomba Mummy that was chasing them. A Phanto appears out of nowhere coming after Mario, Luigi, Princess Toadstool, and Toad, leaving the group surrounded by it and the Goomba Mummy. Mario finds an emergency exit and presses the button, which opens up a trapdoor where Mario and co. fall into it and slide down a really long slide to escape the pyramid.

As the Koopinx's construction has been completed, Koop Tut becomes exhausted from all his hard work and takes a nap on his throne. As Koop Tut falls asleep, Mario sneaks up to his throne to rob his magic staff. He then uses it to turn the Koopinx back into Mushroom People and leads them out of where the Koopinx once was.

When Koop Tut finds out that the Koopinx has mysteriously disappeared, Mouser tells him what had happened while he grabs and pounds him into the ground. Furious, Koop Tut commands Mouser to go after Mario, Luigi, Princess Toadstool, Toad, and all the Mushroom People they've freed and jumps at Mouser, throwing him into another tent.

When Mario, Luigi, Princess Toadstool, Toad, and the Mushroom People make it into the Red Sauce Sea, Mario uses the magic staff to part the sea, creating a path for them to come across safely. Koop Tut finds the group making their way out of the sea and prepares to charge after them. As the entire colony of Mushrooms have made it out of the Red Sauce Sea, Princess Toadstool points out Koop Tut and his pack relentlessly coming after them. Mario throws the magic staff into the sea, causing it to collapse with Koop Tut and his minions in it. Mario, Luigi, Princess Toadstool, Toad, and the Mushroom People all cheer in victory as Koop Tut, Mouser, Trycyde, and Koopa Troopa all swim away in defeat. With Koop Tut and his Koopa Pack gone, Princess Toadstool asks Mario on what they should do for an encore. Mario decides that they should have the biggest spaghetti feed in history and ponders where they can get a hundred billion tons of pasta.

“Magic staff do your trick, turn these mushrooms into bricks!”
—Koop Tut
“Ultra bad news! We're trapped between a mummy and a weird face!”
—Toad
“I hate bad news, and I hate the guy who brings it!”
—Koop Tut
“I'm warning you, let my mushrooms go!”
—Princess Toadstool
“Never! Good bricks are hard to find!”
—Koop Tut