In a dry and deadly desert, Mario is guiding a camel carrying Luigi, Toad and Princess Toadstool through the sand in search of Aladdin's Lamp, which Princess Toadstool believes can be used to defeat King Koopa. Becoming exhausted from the heat of the desert, Mario suddenly sees a waterfall and rushes to it; only to discover that the waterfall is a mirage and that the camel has been licking him repeatedly, much to his disgust. Princess Toadstool proceeds to tell Mario to ignore all mirages, which manifest themselves as giant food items as the gang treks through the arid landscape.

Suddenly, Toad sees a swimming pool, which everyone rushes to, only to discover the water in the pool is a actually a large blue trampoline, which bounces them into a nearby palace with a flip-off roof that allows the gang to fly through the top, causing them to land before the presence of an overweight Sultan. Princess Toadstool, over-hearing a man brag about how his trap has brought more people to his palace, demands to know who the man is. The man proceeds to say that he is Sultan Pasbah and says that the Princess, along with Mario, Luigi and Toad, are now his slaves. Hearing this, Mario, Luigi (who is enclosed in a vase), Toad and the Princess begin to flee from the palace throne room, only to be stopped by a guard. Sultan Pasbah then tells the palace guard to transport Mario, Luigi and Toad to the slave quarters, and attempts to riddle the Princess into joining his harem, much to her horror.

While being transported to their cell, Mario, Luigi and Toad notice that among the treasure horde of Sultan Pasbah is Aladdin's Lamp. Mario proceeds to come up with a plan: he, Luigi and Toad sneak out to get the lamp and use its power to save Princess Toadstool and escape. Managing to sneak out of their cell after their guard has gone to sleep, Mario, Luigi and Toad find Aladdin's Lamp, only to see it's inside a glass containment. Taking out his pizza cutter, Mario easily slices through the glass and grabs Aladdin's Lamp and goes on to tell Luigi about the genie that supposedly inhabits the lamp, to which Luigi who doesn't believe in such a myth.

Suddenly, one of Sultan Pasbah's servants appear and begins to tell the Sultan that Princess Toadstool has been causing all kinds of trouble with her disagreements. The Sultan responds that the Princess is more trouble than she's worth and states that he put out an advertisement for her in the Harem Recycler magazine, planning on selling her to the highest bidder as he takes a bite of tofu. Overhearing what Sultan Pasbah plans to do with the Princess, Mario and Luigi rush off to find a place to summon the genie of the lamp (while Toad oddly remains until the scene changes).

Venturing onto one of the palace's balconies, Mario rubs the lamp which emits a loud shriek and manages to summon the genie, who turns out to be an old and very obnoxious woman who demands to know what Mario and Luigi want immediately, with the once-doubting Luigi convinced that the genie is true as the genie scoffs at Luigi's remark. As the genie begins struggling to get out of her lamp, which is now heavily stuck on her left foot, Toad appears to tell Mario and Luigi that King Koopa has shown up to buy Princess Toadstool, much to the genie's surprise. As King Koopa begins haggling with Sultan Pasbah over the price of the Princess, Mario humbly begs the genie to save her. Attempting to use a magic spell, the genie only succeeds in creating a horrific odor, temporarily causing the bid to cease. Suddenly, King Koopa zooms out of a palace window on a magic carpet (with a Cobrat hood ornament) with Princess Toadstool as his captive as she cries for help from her beloved heroes. 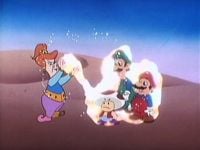 The genie prepares to give Mario, Luigi, and Toad the power of flight.

While flying over the desert, King Koopa begins to taunt the Princess, telling her to prepare for a long and torturous journey. Princess Toadstool then demands the reptilian king tell her where he intends on going, only to get a response to an unspecified location where the Mario Bros. and Toad can never save her. Down below, Mario, Luigi, Toad and the genie begin to try and chase King Koopa, but are unable to catch him. Eventually perspired, Mario, after offering her a gold coin, has the genie give him, Luigi, and Toad the power to fly; though the genie only succeeds in flinging them through the air. Eventually, Toad simply says that maybe they should just buy a magic carpet from a used flying carpet lot.

Later, Mario, Luigi, Toad and the genie begin to track down King Koopa in a somewhat shoddy magic carpet, as the genie complains about Mario's driving. In front of them, King Koopa, having reached his designated area, prepares to push Princess Toadstool from his carpet and into some quicksand below. Seeing King Koopa, Mario has Toad disguise their flying carpet by repeatedly bouncing up and down, covering the magic carpet in dust and making it resemble a cloud. Unfortunately, the disguise is ruined when the genie, possibly allergic to dust, sneezes, causing the dust to blow away.

King Koopa hears the sneeze coming from nearby and suddenly becomes alert. As Princess Toadstool tries to convince King Koopa that it was her who sneezed, though King Koopa, having already seen Mario and the gang coming close, executes his plan and proceeds in pulling the gearshift on the dashboard, opening a trap door under the passenger seat, dumping the Princess from his own carpet and into an immense pit of quicksand below. With the Princess rapidly sinking, King Koopa scoffs at the Princess and zooms over above the Mario Bros. carpet and sucks the dust from Mario's carpet's new cloud disguise, using an extendable vacuum gadget, and begins to taunt Mario, telling him how he succeeded in dumping Princess Toadstool into quicksand. As Mario begins to maneuver in the direction of Princess Toadstool (who is crying for help), King Koopa calls the Pidgit Express, with the aide of his carpet phone, ordering a dozen Pidgits to attack Mario, Luigi, Toad and the genie.

Having managed to reach Princess Toadstool, Mario dives down over the pit and has Luigi pull her from the quicksand and place her in the magic carpet's back seat with Toad and the genie. Suddenly, a swarm of Pidgits appear and begin to peck and gnaw on Mario's magic carpet, causing it to deteriorate with each bite. The genie, having seen enough action for one day, proceeds to enter her magic lamp and throw herself overboard as the Pidgits continue to eat away at Mario's carpet. Luigi, suddenly remembering he can speak Pidgit, proceeds to grab a nearby unnamed Pidgit and speaks to it in its non-sensical language; the Pidgit proceeds to tell its friends about what Luigi said and it and its companions proceed to swarm onto King Koopa's flying carpet, devouring it. Luigi reveals to Toad, who asks what he told the Pidget, that he told the Pidgit that if it wants to eat something really delicious, it should try King Koopa's magic carpet. As King Koopa begins to desperately drive away from the Pidgits, the lamp lands in his flying carpet and the genie begins to annoy and badger him, much to the amusement of Mario, Luigi, Toad and Princess Toadstool and they all laugh. As King Koopa swerves uncontrollably, the genie plants her lamp in the passenger seat of King Koopa's now-shabby carpet and bickers about his driving, telling him that she will make his life miserable for trying to harm the Mario Bros. The episode ends as Mario, Luigi, Princess Toadstool, and Toad cruise over the skies of the arid desert with smiles on their faces. When Mario asks Toadstool where they should head to next, Toadstool says they should go to a carpet cleaner, much to everyone's amusement.