This article is about the episode which appears in The Super Mario Bros. Super Show!. For the alter ego King Koopa employed, see King Koopa's alter egos § Koopa Klaus.

"Koopa Klaus" is the twenty-ninth cartoon episode of The Super Mario Bros. Super Show!, serving as the animated series' Christmas episode. Its corresponding live-action segment is "Little Marios". It is the only episode where Mario does not wear his normal plumber outfit and wears a different outfit, and that does not immediately begin with the "Plumber's Log". 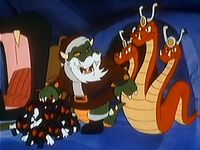 Koopa boasts about his plan to ruin Christmas.

In an icy castle somewhere in the North Pole, King Koopa, going by the alias of Koopa Klaus, is overseeing the production of toys being loaded onto a conveyor belt, only to be smashed by a machine resembling an evil nutcracker. Koopa Klaus rants about his hatred of the spirit of Christmas, and admires the destruction of the toys. Tryclyde, dressed in a cheap reindeer costume, tells Koopa Klaus that Ice Bombs have been loaded on his sleigh. Glad to hear the news, Koopa Klaus reveals that he plans to use said Ice Bombs to freeze Santa Claus's workshop, which will in turn cause everyone will have an unmerry Christmas. After reprimanding Tryclyde for making a joke, Koopa Klaus takes off in an Albatoss-driven sleigh.

Meanwhile, Mario (dressed in tropical-themed clothing) and friends arrive in a very snowy landscape via digging a tunnel, prompting Luigi to point out that they have not arrived in Hawaii Land as planned, with Toad (who was in charge of navigating) sheepishly admitting they made a wrong turn. Princess Toadstool then reads a nearby sign that tells them they are near the North Pole, so Toad suggests they pay a visit to Santa Claus's workshop. Mario finds this suspicious and asks if Toad deliberately brought them here, but Princess Toadstool agrees to it, since it's Christmas Eve. On the way over, though, it becomes clear that all Toad can think about is receiving presents. Princess Toadstool decides to present Toad with an early gift - a snowboard. Toad eagerly accepts the snowboard and then promptly begins playing with it without bothering to thank the Princess. 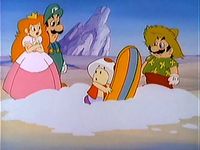 Mario, Luigi, and the Princess are ashamed of Toad's selfish behavior.

Arriving at the workshop, Mario's group learn that they were too late to stop Koopa Klaus from freezing the workshop with his Ice Bombs, but they arrive just in time to see him flying off with a captive Santa in tow. Toad begins to cry, as he worries that he'll never receive another Christmas present if Santa is missing. However, Mario tells Luigi to load a heavy ice block from a nearby igloo onto the see-saw in the Elves' playground. After doing that, Mario makes Luigi leap onto the see-saw from his shoulders, catapulting the block at Koopa Klaus' sleigh, hitting it dead on and causing both Koopa Klaus and Santa to fall to the ground. Holding Santa with one hand, Koopa Klaus uses an empty sack to parachute downwards.

Without his sleigh, Koopa Klaus is forced to make off with Santa on foot with Mario's group in hot pursuit. He manages to gain a slight boost by using his empty sack as a wind sail. The Marios start throwing snowballs at him, so Koopa Klaus opts to collect the snowballs in said sack and throws it at the Bros. Following that, Koopa Klaus slides down a snowy hill and onto a frozen ice pond using Santa as a sled. Mario and Co. follow Koopa Klaus onto the ice, where he calls out some Flurries on skates to attack by carving a block of out ice from the pond and knocking it towards them. The Mario Bros. and Toad manage to defeat the Flurries by shoving their ice block back at them.

Koopa Klaus then drags Santa into a nearby cave, so Mario's group follows him. Before entering, Luigi remarks that the cave is quite dark, but Princess Toadstool reminds them that the world will look very dark without Christmas. Toad then brings up his desire from presents, as well as rescuing Santa, so the enter the cave. The cave proves to be a bumpy ride for the quartet, and they end up falling off a cliff at the cave's exit and onto a snowbank. Koopa Klaus, who apparently didn't endure the same ride they did, holds Santa over the edge of the cliff, threatening to drop him into the icy water below. 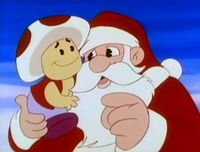 Santa becoming touched with Toad's decision of offering his beloved snowboard as a gift.

Princess Toadstool tries to reconcile with Koopa Klaus about wrecking Christmas, but he then makes the mistake of shouting about his holiday hatred, causing an avalanche. Mario tells Luigi, Princess Toadstool and Toad to take shelter in the cave, and notes that he will try to rescue Santa with his plumber's snake. Mario manages to lasso Santa away from the incoming avalanche with his plumber's snake; Koopa Klaus, on the other hand, is forced to dive into the water, and he ends up climbing onto an iceberg, where he laments about his foiled plans to ruin Christmas. Asking himself about what else could go wrong, he turns his head back in response to a loud roar, and learns that the iceberg is inhabited by an angry polar bear.

Back at his workshop, Santa thanks Mario's group for rescuing him from Koopa Klaus. Unfortunately, Santa's rescue doesn't change the fact that his workshop is still frozen, and he fears he won't be able to make his Christmas deliveries this year. Toad at first doesn't care, since he already got his present, but after some prompting from Princess Toadstool, he decides to give his snowboard to Santa, saying that he'll at least have one present to give. The warmth of the Christmas spirit spread by Toad then manages to melt the ice around Santa's workshop, thus saving Christmas.

Afterwards, Santa and his Elves have finished loading presents onto his sleigh, when Mario's group comes running up to them. Santa then announces that he'd like to give them all a special present, and allows them to ride in his sleigh with him as he delivers the presents, even letting Toad sit alongside him in the front seat. As the sleigh takes off into the sky, Santa wishes a "Mario Christmas to all, and to all a good night!".