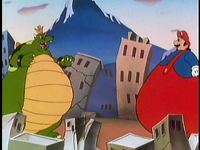 Outside, as people flee from him, Koopzilla grabs a parked car and proceeds to start eating it, only to be attacked by a pair of missile firing planes. Annoyed by the assaulting planes, Koopzilla simply swats at them, causing them to crash and the pilots of them to evacuate using parachutes. Watching as the planes explode some distance away, Koopzilla is attacked by an armada of tanks, which begin blasting him; Koopzilla swiftly defeats these tanks by simply blowing them away, and promptly laments afterwards that destroying a city can be hard work. Nearby, Luigi, who is driving a motorcycle Mario is on as well, tells Mario that he hopes his crazy plans works; Mario responds to Luigi's worries by saying that his crazy plans always work and that all they need to do is find Koopzilla, whose roar Mario hears just after exclaiming this.

Grabbing a water tower, Koopzilla begins to drink the water in it while saying that all the destruction he has been causing has worked up his appetite. After saying this, Koopzilla begins eating a radio tower he had been holding; as Koopzilla eats, Mario and Luigi drive up to and park near his feet and Mario, using a megaphone, begins to taunt and threaten Koopzilla; becoming enraged by Mario's jeers towards him, Koopzilla tries to crush him with his foot, only to miss when Mario and Luigi drive away. As Koopzilla chases him and Luigi, Mario says that their plan has worked. Up ahead, Toad has just finished preparing a trap for Koopzilla, consisting of a gigantic net to be dropped on him; as Toad finishes some last minute adjusting on the net release, Princess Toadstool tells him that he finished setting the net up just in time, as Koopzilla is approaching. Managing to lure Koopzilla to the exact position under the net, Mario has Luigi stop the motorcycle so he can get off, which he does to alert Toad to drop the net. Hearing Mario, Toad releases the net, which falls on Koopzilla, surprising him and knocking him over.

Struggling to escape from the net, Koopzilla begins to threaten Mario, only to be informed by him the net he is trapped in is made of solid steel and unbreakable. Koopzilla proves this assumption of Mario's wrong when he, after a lot of struggling, manages to break the net confining him; as Princess Toadstool and Toad flee after telling Mario and Luigi to run themselves, Koopzilla begin to resume chasing Mario and Luigi, who frantically try to escape him on their motorcycle. As Koopzilla tells Mario and Luigi to stop moving, Luigi asks Mario how they will escape the pursuing Koopzilla; responding to Luigi's question, Mario has him stop and jump into a manhole ahead of them, which Princess Toadstool and Toad are in. Seeing Mario, Luigi, Toad and Princess Toadstool duck into the manhole, Koopzilla sticks his arm into the manhole and begins trying to grab one of them. With Koopzilla's hand trying to grab them, Mario grabs a pipe out of the wall. Using this pipe, the end of which is broken and pointed, Mario jabs one of Koopzilla's fingers with it, causing Koopzilla to yell in pain and leap through the air, landing nearby. His finger having become swollen and red, Koopzilla, enraged, decides to ignore Mario, Luigi, Toad and Princess Toadstool for the time being and go back to destroying Sayonara.

At Dr. T. Garden's laboratory, Dr. T. Garden has just finished another batch of Super Sushi for Mario to eat. Giving the Super Sushi to Mario, who hastily eats it with spaghetti, Dr. T. Garden, Luigi, Toad and Princess Toadstool watch as he grows gigantic, destroying Dr. T. Garden's building in the process, much to his chagrin. Elsewhere in Sayonara, Koopzilla is tearing a building apart when he notices Mario leap towards him. Seeing that Mario has become as large as he is, Koopzilla begins to grapple with him; after some fighting, Mario manages to toss Koopzilla over his shoulder and into a nearby building. Before Koopzilla can get up, Mario grabs his tail and begins swinging him around before tossing him into a pile of collapsed buildings. As Mario taunts him, Koopzilla gets up and grabs a pair of telephone poles to be used as weapons. As Koopzilla approaches him, Mario grabs a train and begins using it as a weapon.

As Mario and Koopzilla's battle intensifies, Toad, who is in Dr. T. Garden's shoddily rebuilt laboratory, states with some irony that if the battle continues, Mario may save the city, but there will be no city left. After Toad exclaims this, Dr. T. Garden unveils to him, Luigi and Princess Toadstool that he has created an antidote to the Super Sushi, which can be used to shrink Koopzilla. As Mario and Koopzilla fight, Princess Toadstool, Luigi and Toad approach with a large needle filled with Super Sushi Shrinker. After dodging a billboard tossed at him by Koopzilla, Mario lands in front of him and manages to somehow pull the street out from under Koopzilla's feet like a rug, knocking Koopzilla to the ground. Getting up, Koopzilla begins to charge towards Mario, only to be jabbed in the ankle by Luigi, Toad and Princess Toadstool's Super Sushi Shrinker filled needle. Having shrunk back to his original size, Koopzilla, enraged, uses a Magical Potion to open a portal to a Warp Zone, which he leaps into.

Glad that Koopzilla is gone, Princess Toadstool, Luigi, Toad and Mario, who has also returned to normal (off-screen), return to Dr. T. Garden's laboratory, where Dr. T. Garden thanks them for saving Sayonara. Having become hungry from fighting Koopzilla, Mario, while looking through some containers in Dr. T. Garden's laboratory, finds a large pill and eats, only to be informed by Dr. T. Garden that the pill was his newest invention, Shrinking Sukiyaki. After eating the Shrinking Sukiyaki, Mario shrinks to minuscule size and, panicking, asks Dr. T. Garden to give him the antidote, only to be told by him that there is no antidote and that he will have to wait a week for the effects of the Shrinking Sukiyaki to wear off. Unhappy with this, Mario decides that as long as he is this size, he could at least eat his own weight in pasta as Luigi, Toad, Professor, and Princess Toadstool laugh. 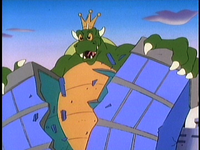