This article is about the Super Mario Bros. Super Show! episode "Plummers Academy". For the academy itself featured in the episode, see Brooklyn Plumbers Academy.

Plummers Academy is the fortieth episode of The Super Mario Bros. Super Show! Its corresponding live-action segment is "Glasnuts." 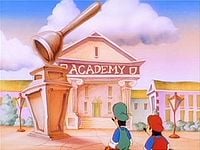 Mario and Luigi at the entrance to the Brooklyn Plumbers Academy.

The episode starts off with Princess Toadstool, Mario, Luigi, and Toad running away from King Koopa and his minions in his castle. The four of them are stopped in a circular room where King Koopa confronts them along with a group of Koopa Troopas and Mouser. Mario and Luigi attempt to fight them off with the help of Mario's Golden Plumber's Helper and Luigi's Golden Wrench. While the brothers are fighting, King Koopa snatches Princess Toadstool but in the nick of time Mario throws the plunger at King Koopa's face causing him to let go of the Princess. Enraged, Koopa pulls a lever opening a trap door to a dungeon where the four of them fall in. While in the dungeon the three converse over how to get Mario's Golden Plunger back. Princess Toadstool tries to console Mario by promising to replace the plunger but Mario replies "It's a one of a kind" because the President of the United States gave it to him. Curious, Toad asks why he gave it to him. Mario replies "It all started the day Luigi and I entered the Brooklyn Plumbers Academy to start our basic training."

The show then flashes back to the day when Mario and Luigi enter the academy with Mario commenting they had the meanest teacher. Mario and Luigi enter and find four other students. Their drain sergeant, Sergeant Kooperman then put Mario and Luigi through various drills such as carrying bathtubs up a fire escape fast and unclogging a sink in ten seconds. After squirting the clog from the sink into the Sergeant's face he sends the two to KP, which stands for Killer Plumbing. Once in Killer Plumbing the two have to dig a hole which presumably ends up more than twenty feet deep. Mario asks Sergeant Kooperman for water, and ignoring Mario's plea, Kooperman orders them to get out of the hole and put a bunch of pipes together without wrenches in twenty minutes. After the twenty minutes expire, Kooperman comments that it is time for the final test. He then turns on a hose that is connected to Mario and Luigi's pipes. The contraption of pipes fall over surrounding the brothers while the water pours in. Luigi comments that he is drowning, but Kooperman does not care and comments "I don't help guys with the wrong stuff". He then throws a pile of pipes on the brothers, enclosing them in a box made of pipes. The two push on the pipe-walls until they give way. Upon the collapse of the pipe-box, they are carried by rushing water to the front of the academy.

Once in the front of the academy, Mario points out a statue of Salvador Drainotto, the greatest plumber in the world and the founder of the academy. Mario reads a plaque on the statue that states "When the plumbing gets tough, the tough get plumbing". However, Luigi only says that they have the wrong stuff and they should try a new job such as being librarians. As the two proceed down the street they find a policeman guarding an area. They ask about what is going on and the policeman replies that the president of the U.S.A. is showing the Russian president around Brooklyn. so the two brothers decide to watch. Meanwhile Sergeant Kooperman is fixing a lady's sink, he is trying to unclog her sink with a plunger, but is having trouble. When he notices an order of bags of "Norten's Drain-Buster" being dropped off outside, he goes to grab a sack of it, but he accidentally grabs a bag of cement from an adjacent construction area. Two construction workers, who ordered the bags of cement, ask themselves what Sergeant Kooperman wanted with their concrete. Kooperman starts to pour it down the drain, but when he notices that it is not working, he comments that the problem must be in the sewers, and starts to pour the concrete (still thinking it is "Drain-Buster") down a manhole. The construction-men confront Sergeant Kooperman as to why he took their concrete. Flustered, he realizes his mistake, then gasps when one of them remarks "fast drying concrete".

Back with Mario and Luigi, they see the presidents coming down the street in a limousine. Just as they approach Mario and Luigi, a rush of water comes flowing out of a manhole, flooding the streets. The policeman exclaims that someone needs to save the president. Mario and Luigi realize that this is the perfect chance to prove that they are plumbers. Mario and Luigi then get scuba gear on and get a jack hammer and proceed to dive into the sewer. After coming in contact with an alligator, they find the concrete blockage and proceed to destroy it with the jack hammer. After the blockage is destroyed, the streets get cleared of water and the crowds of cheering people come back. The policeman then thanks the brothers and remarks that the president has been saved.

The flashback ends with the president honoring the Mario Brothers at the White House and presented Mario with the Golden Plumber's Helper and rewarded Luigi with Golden Wrench. The scene returns to the present, to which Princess Toadstool has an idea, asking if Luigi still has his Golden Wrench, which he replies in the affirmative. Luigi then uses his wrench to unscrew bolts on a pipe to make water come out. The water starts to rise, they eventually reach the top, push open the trapdoor and scurry away. Meanwhile, Mouser is still trying to get the Golden Plumber's Helper off Bowser's nose when Mario and friends show up and pull it off. The four then run out of the castle and Mario states that he feels hungry and "When the plumber gets hungry, the plumber gets pasta!" and the four laugh happily until the credits.