The Mark of Zero

"The Mark of Zero" is the thirty-third episode of The Super Mario Bros. Super Show!. Its corresponding live-action segment is "Toupee".

While traveling in El Desertland, Mario, Luigi, Toad, and Princess Toadstool search for the legendary masked hero known as Zero, whom they hope will help defeat King Koopa. Luigi starts to wonder if Zero actually exists. Mario assures him that Zero does exist. Toad remarks how ostriches are too dumb to notice the heat, which causes the Ostros pulling them to stop in their tracks, insulted. He then regrets his comment.

Princess Toadstool notices a taco stand nearby, which the Ostros then rush towards. Popping out of a fake rock on a mountain, King Koopa, going by the name of El Koopitan, becomes aware of their plans and begins to hatch his own to stop them. The Ostros reach the taco stand, creating a cloud of dust. The vendor, wondering whether they came to buy something or make a mess, asks them for their order. After listing each item, Mario responds by saying yes three times. 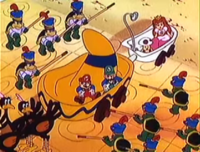 El Koopitan responds by attacking everyone with his Koopa Pack. Panicking, the vendor goes back in her shop and closes it. With the Koopa Pack fast approaching, Princess and Toad hop in the bathtub part of the vehicle they were riding in, while Mario and Luigi hop into the sombrero part of the vehicle after Mouser pulls on a cactus, splitting it into segments that fly towards them. Koopa Troopas on Ostros, with some popping out of a hole in the ground, also rush towards them. Surrounded, Mario and Luigi wonder what to do next. 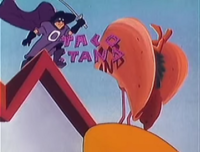 Out of nowhere comes Zero, leaving a look of panic on King Koopa's face. Using a whip, he loops it on a cactus and uses it as a swing, knocking a row of Koopa Troopas down. He then uses his whip to tangle two other Troopas up and launch them towards a cactus. After Zero is noticed by the four heroes, Mouser charges towards him and begins a sword fight, while Mario and Luigi fend off a group of Koopa Troopas. Mouser chops a large chunk of a cactus near him and kicks it off. Zero chops up a cactus near him. While Mouser laughs at Zero, Zero blows on the cactus and shows that he chopped it in pieces. Irritated, Mouser continues their battle, but Zero knocks Mouser's sword out of his hand and marks a zero on his chest, frustrating him even further.

El Koopitan grabs a small cactus of his own, tossing it at Zero, who was putting his sword back. The small cactus pins his cape to a bigger cactus, leaving him stuck. El Koopitan then orders the Koopa Pack to take Zero away with them. With El Koopitan escaping, the princess wonders where they went off to, while Mario comments on how they did not get a taco.

Sometime later, El Koopitan has subsequently enslaved the citizens of the shady village, forcing the townspeople to give him their vegetables as well as stealing all the gold from the Toads as well. The heroes decide that it is up to them to find Zero. 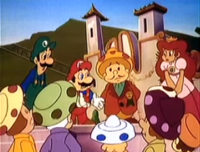 Mario talks with the mayor.

After a talk with the mayor and asking the citizens if they know where El Koopitan is hiding, they panic and run away at the sound of his name. The mayor explains to the Bros. that the citizens want to help, but they are too afraid to stand up to El Koopitan. Just then, El Koopitan shows up as a surprise attack on the village. Mario tells him that they are not afraid, and the townspeople will help, only to remember that they ran away. The Koopa Pack again attacks them, and the heroes toss nearby vegetables at them, knocking them off their Ostros. However, only a few are knocked off, and the rest surround them just as they run out of vegetables. Two Koopa Troopas then apprehend Luigi as he summons the chariot to escape. Mario, somewhat sympathetic, finds and tosses some tortillas at them, knocking El Koopitan off his Ostro, and knocking out the Troopas surrounding Luigi, who then joins the others in tossing tortillas.

After enough tossing, El Koopitan retreats. Mario jokes that Mexican food does not agree with El Koopitan, as it was used negatively on him, and eats a tortilla. Later, the mayor apologizes and repeats his explanation on why the townspeople would not help. That somehow gives Mario an idea. El Koopitan later tells the Koopa Pack that they will be able to take over the town. El Koopitan then plots revenge on the town for driving him out, and commands a nearby Koopa Troopa to literally pull out a street signal and toss it over to Mouser, who then declares that as the "signal" (the light on the signal is even green to symbolize "go"). El Koopitan again orders the Koopa Pack to attack and the villains storm the town. 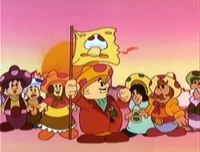 The townsfolk celebrate their victory. 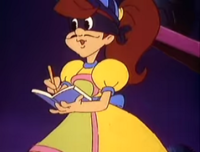 Just then, Mario and Luigi arrive and announce that Zero has arrived with his sidekick, Zero plus One. El Koopitan is, obviously, shocked at the sight of Zero's return while the mayor and the villagers are overjoyed. Mario launches a cart of vegetables at the Koopa Troopas, then marks zeros on their chests. Luigi marks a Koopa with a "0+1". The mayor hoists a flag and leads the villagers in throwing vegetables at the Koopas. In a panic, Mouser tells El Koopitan to retreat to his secret hideout, unintentionally revealing where it is hidden, unaware that an incognito Mario is lingering in the shade eavesdropping onto their whereabouts. El Koopitan angrily grabs his hat and begins to hit Mouser with it as they are all driven out of town. The mayor and villagers celebrate by throwing their sombreros in the air. Mario, Luigi, the Princess, and Toad then go to El Koopitan's secret fortress, thanks to a dim-witted Mouser. When they arrive at night, Mario and Luigi glide to the fortress using their capes from a nearby spire, as they are high up on a rocky wall surrounding it.

The Brothers are then quickly caught by the spotlights and are caught in a battle with a Koopa Troopa army, which proves no match for the brothers as they quickly defeat them. After defeating El Koopitan and Mouser once and for all, the Mario Bros. free Zero from his prison. Later, back at the taco stand, Princess Toadstool announces that with Zero free, the Mushroom people would not have to live in fear any longer. The taco vendor arrives and asks if they are ready to order, having accidentally left her mask on revealing that she is Zero, much to everyone's surprise. She then tells them that if they will keep her secret, she will let them have taco salads; tacos they can carry. Mario assures her that he will never tell, happily eating one of the tacos as Luigi, Toad, and Princess Toadstool laugh. 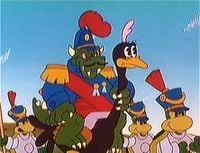 Taco Vendor: "So what will it be? Burritos? Enchiladas? Quesadillas?"
Mario: "Yes, yes and yes!"
El Koopitan: "And how about an all out attack from El Koopitan and his Troopas on the side?"

Luigi: "Bring them on! I'm ready for 'em this time! What am I saying?"