"The Great BMX Race" is the ninth episode of The Super Mario Bros. Super Show! Its corresponding live-action segment is "Mama Mia Mario". 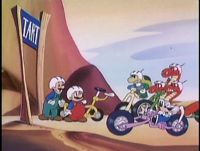 In the Desert Kingdom, Mario and Luigi are riding a tandem motorcycle, which is pulling a bathtub carrying Princess Toadstool and Toad in it. As Toad begins to perform acrobatics around on the bathtub's shower head, much to Princess Toadstool and Luigi's amusement, Mario continues to drive through the Desert Kingdom; unbeknownst to them, though, the are being watched by Fryguy, who is hiding behind a cactus.

As Mario's group begin to approach him, Fryguy begins to shoot fireballs at them; with a swarm of fireballs coming at them, Mario and Luigi are forced to stop their motorcycle. This sudden stop of the motorcycle winds up launching Toad through the air. After traveling through the sky, Toad lands near Fryguy, who begins trying to hit him with fireballs. Managing to evade Fryguy's fireballs, Toad learns from Fryguy that he owes him sixty Gold Coins, which Toad needs to pay back to Fryguy before sunset, or else.

Hearing Fryguy's threat, Princess Toadstool approaches him and says that Toad can't pay him, as all his money was taken by King Koopa. Hearing this, Fryguy says that maybe Toad can get his money another way, such as by winning the Great BMX Race. After saying this, Fryguy leads Toad, Luigi, Mario and Princess Toadstool to a nearby cactus with a poster advertising a bike race on it. After looking at the bike race poster, Mario and Luigi decide to enter it so they can win the prize money to pay off Toad's debt to Fryguy.

Later, the Mario Brothers approach the starting line of the Great BMX Race's track and begin to wonder where their racing opponents are. As the brothers look around, the ground suddenly begins to rumble, signifying the approach of their racing opponents: Mouser, Tryclyde and a Koopa Troopa. Seeing Mario and Luigi, Mouser begins to taunt the two, much to Tryclyde and the Koopa Troopa's amusement. Unfortunately for Mouser, his jeers at the Mario Brothers make himself, Tryclyde and the Koopa Troopa laugh hard enough to allow the brothers to drive away unnoticed.

On the racetrack, the Mario Brothers continue to travel at the steady speed of sixty miles-per-hour. As Mario begins to increase the speed of the motorcycle, Luigi begins to feel somewhat sick. As Mario asks if Luigi is alright, Toad and Princess Toadstool run onto the Desert Kingdom track and begin trying to get the brothers' attention. Unfortunately, they fail, and the two simply drive by them.

On the racetrack, Mario and Luigi have just finished having a large meal at the Pasta Pit and are beginning to race again. As they begin to pick up speed on their motorcycle, though, they hear a taunting Mouser behind them, who quickly drives past them with Tryclyde and the Koopa Troopa. Knocked from their motorcycle by Team Koopa, the Mario Brothers manage to climb back on their motorcycle and start racing again.

Seeing the Mario Brothers driving up a cliff, King Koopa instructs Team Koopa to give them a scare. Hearing King Koopa's commands, Mouser, Tryclyde and the Koopa Troopa turn their vehicles around and begin driving towards the brothers. With Team Koopa fast approaching them, Mario and Luigi lose their focus on the race and subsequently hit a rock, which causes them to lose control of their motorcycle and fall off the cliff.

As he and Luigi plummet from the cliff, Mario, opening a container attached to the front of his motorcycle, grabs a plunger and, using it as a grappling hook, stops his and Luigi's descent. Using some pedals on his motorcycle, Mario and Luigi manage to climb back up onto the cliff and begin to head to the Great BMX Race's finish line, much to Mouser, Tryclyde and the Koopa Troopa's surprise.

Seeing that Mario and Luigi are still alive, King Koopa commands Team Koopa to activate the speed-increasing devices in their vehicles; as Team Koopa begins to speed toward the Mario Brothers, Toad and Princess Toadstool begin trying to escape from the grip of the sleeping Cobrat keeping them captive. Eventually, Toad gets an idea, he and Princess Toadstool can escape the Cobrat's grasp when the serpent lets out its breath when it snores.

Toad's escape plan actually works, and he and the Princess manage to escape from the Cobrat; unfortunately, the Cobrat notices that they are missing and alerts King Koopa to their escape. Sending his Koopa Troopas after Toad and Princess Toadstool, King Koopa is forced to chase them himself when his Koopa Troopa henchmen accidentally trip and knock themselves unconscious. As King Koopa chases them, the Princess and Toad find an old bicycle and begin to drive away from an angered King Koopa.

As Luigi acts as the lookout for Team Koopa, Mario continues to drive their motorcycle as he combs his mustache. As Mario continues to simultaneously drive and comb his mustache, Luigi alerts him to the fact that Team Koopa is approaching them from behind. Hearing Luigi, Mario, opening a container, throws an open can of tomato sauce at Team Koopa. As Mario and Luigi begin to laugh at Tryclyde and the Koopa Troopa, who have lost control of their vehicles, they are suddenly attacked by Mouser, who has begun to throw Bob-Ombs at them.

After the Mario Brothers dodge a Bob-Omb thrown by him, Mouser himself gets caught in the explosion of the Bob-Omb and becomes disoriented in a cloud of dust. With Mouser distracted, his Koopa Troopa ally launches at boulder at the brothers, who dodge it. Unfortunately, the tires of Mario and Luigi's motorcycle burst after driving onto the debris of the Koopa Troopa's launched boulder.

As the Mario Brothers inspect the tires of their motorcycle, they find themselves surrounded by Mouser, Tryclyde and the Koopa Troopa, who prepare to attack them. With Team Koopa closing in on them, the brothers manage to confuse them by playing a game of Patty Cake. With Team Koopa distracted, Mario and Luigi create a cloud of dust and begin to run to a nearby Vegetable patch, with Team Koopa chasing them.

Reaching the vegetable patch, Mario and Luigi begin to throw large vegetables at Team Koopa, hitting them hard enough to knock them off their vehicles and injure them to the point they cannot continue racing. The Mario Brothers begin to think they've won the race by default, but are approached by Toad and Princess Toadstool, who inform them that this entire race was a set-up. Fryguy was actually in King Koopa's employ all along.

Enraged by this news, Mario, Luigi, Toad and Princess Toadstool see King Koopa nearby on a rather small bicycle. As King Koopa begins to taunt them, they begin to chase him through the Desert Kingdom, throwing vegetables at him all the way.