It has been requested that this article be rewritten and expanded to include more information. Reason: include more appearances

This article is about dinosaurs in general. For the microgame in Game & Wario, see Dinosaur (microgame).

Prehistoric nonavian dinosaurs are one of the many types of creatures that have appeared in Mario games. A few different dinosaur species exist in Mario's world, such as Yoshis, Birdos, and Rexes.

Super Mario World takes place in Dinosaur Land, and is filled with many dinosaur-like creatures, such as Yoshis, Rexes, Reznors, Blarggs, and Dino-Rhinos.

In Super Mario Odyssey, T-Rexes appear sporadically, most notably in the Cascade Kingdom. The kingdom additionally features many dinosaur skeletons, most notably an enormous Triceratops.

In the Super Mario World television series, dinosaurs appear throughout. Aside from the ones in the game it is based on, several others appear, notably the evil dinosaur.

In the Super Mario Bros. live-action film, an alternate, unnamed version of Earth is revealed to exist. This parallel Earth was brought into creation when the meteorite struck the true Earth 65 million years ago, causing spatial and dimensional disturbances, resulting in the creation of the alternate Earth. Some dinosaurs were then flung into this parallel world, while their kin went extinct on Earth.

On this Earth, various types of dinosaurs evolved into humanoid creatures, though some, such as Yoshi, seemed to have retained their reptilian forms. Aside from one rundown city, Dinohattan, this Earth is a desert wasteland, lacking various resources.

In the NES version of Mario's Time Machine, a Dinosaur Egg is stolen from the Cretaceous Period by Bowser. When Mario travels back in time to return it, several sauropod dinosaurs can be seen in the background. Additionally, in other versions of the game, the good endings feature Bowser travelling back in time to the Cretaceous Period and getting flattened by a dinosaur's foot. 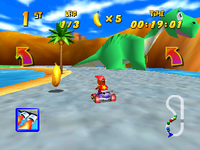 In Diddy Kong Racing, green sauropod dinosaurs appear as obstacles in tracks of Dino Domain, where they walk around a small area. Additionally, a yellow T-Rex appears exclusively in the intro, racing against Bumper. Tricky the Triceratops is also seen with two younger Triceratops in the ending: a pink one and a yellow one.

In Mario Artist: Paint Studio, six dinosaurs inhabit Dinosaur Land, where the player is able to take pictures of them. These dinosaurs include: a Brachiosaurus, a Velociraptor, a Stegosaurus, a T-Rex, a Triceratops, and a Gallimimus.

In version 1.1.0 of Mario Kart Live: Home Circuit, a gate customization called "Dino Roar" resembles a skeleton from a dinosaur. It lets out a big roar and will slow down any kart that is in its path.

In Yoshi's Crafted World, there are four yellow Tyrannosaurus crafts made of origami paper found on the flip side of Poochy's Magma Run.