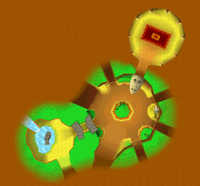 The Dino Domain is the first world of Diddy Kong Racing and Diddy Kong Racing DS and an area of Timber's Island. Racers are required to have at least one Golden Balloon to enter. The Dino Domain is set in a dry, prehistoric area with dinosaurs and pterodactyls. Most of the courses are in a canyon landscape, which features small lakes and some plant life, specifically grass and pine trees. One of the stages is set in an entirely volcanic region, along with its Challenge Level. Tricky the Triceratops is the boss of the Dino Domain.

The world's hub is located to the right of Wizpig's rock-carved head on Timber's Island. To enter the Dino Domain, the racer drives up a small bridge leading into a tunnel carved in a hill. A large door to the hub is located at the end. A rainbow is positioned just outside the tunnel, likely resulting from the waterfalls on each side. The Challenge Door is located on the right side, with a small pond just outside it.

Like its subsequent worlds, the Dino Domain has a Trophy Race that the player can enter after they win against Tricky again. Also like in the other worlds, T.T. walks around the center of the Dino Domain's hub, and the player can bump into him to review their game progress. In the Nintendo 64 version of the game, it is the only world to have all its racetracks playing different tunes.

In the DS remake, this world's main lobby has dinosaur skeleton bones, some green grass and trees added and the entrance to its Wish Door has a waterfall added behind the stones in the puddle.

For courses where two or all three vehicles can be used, vehicles listed in bold print are the mandated vehicle during Adventure Mode and the Trophy Race, and other vehicles can only be used in a Time Trial or after the course is completed.