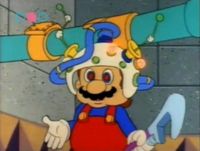 Mario, under the effects of the Lame Brainer

The Lame Brainer is a special helmet created by Kooky von Koopa which is capable of turning anyone who wears it into a mindless drone, complete with a hypnotic voice and red pupils, until it is removed.

In The Adventures of Super Mario Bros. 3 episode "Oh, Brother!", Kooky, having successfully captured Mario with his Plumber Pole, uses the Lame Brainer on him to force him into obeying his every command. To demonstrate the Lame Brainer's effects on Mario to King Koopa, Kooky presents Mario with a bowl of pasta. Although Mario wants the pasta at first, Kooky tells Mario that he hated pasta. Unable to think for himself, Mario then agrees with Kooky and rejects the pasta.

King Koopa then asks for Mario to fix the broken Power Shower pipe, and Mario does so. When Mario finishes, Frog Luigi arrives to save him. However, as Mario is still under his control while wearing the Lame Brainer, King Koopa orders him to attack Luigi with a wrench.

Luigi, unable to reason with Mario, tries to talk some sense into his uncontrollable brother. When talking about their past experiences does not work, Luigi aggravates Mario by pulling down on the Lame Brainer (in place of his cap), his overalls and his mustache. By doing this, Luigi bypasses the effects the Lame Brainer has on Mario, overloading it.

Luigi's actions cause the Lame Brainer to pop off of Mario's head, freeing him from his trance, and onto Kooky's head, forcing the Koopaling into behaving like a mindless drone. Mario then takes advantage of the situation by ordering Kooky to attack King Koopa, and Kooky then begins to chase his own father out of the dungeon.

The fate of the Lame Brainer, including how it was ultimately removed from Kooky's head, is unknown. As it was never seen again, it is possible that King Koopa simply destroyed the Lame Brainer afterwards, due to the trouble it caused him when it was misused on Kooky.