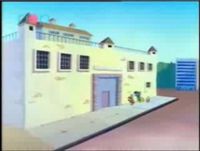 The Bastille is a now-defunct prison located in Paris, France. In The Adventures of Super Mario Bros. 3, Bowser captures the citadel and makes it operational again to suit his purposes.

It appears in the episode "Super Koopa". Bowser manages to capture Mario, Luigi and a submarine captain, all of whom he throws into a cell in the Bastille, where a Sledge Bro guards them.

Luigi attempts to dig out of the cell using a spoon, but is unsuccessful. Toad, having received a message from Princess Toadstool, puts on a disguise to enter into the Bastille, so that he can sneak in a cake to Mario and Luigi. Inside the cake is a Brick Block containing a Super Leaf, which Mario uses to become Raccoon Mario. As Raccoon Mario, he is able to break out of the cell with his tail. Following the expulsion of Bowser from France, the Bastille presumably returns to its current status as a museum.