This article is about the third episode of The Adventures of Super Mario Bros. 3. For the VHS release of the same name, see Mind Your Mummy Mommy, Mario (VHS).

"Mind Your Mummy Mommy, Mario" is the third episode of The Adventures of Super Mario Bros. 3. It premiered on September 15, 1990 and was paired with the episode "The Beauty of Kootie". The episode is featured on the cover of the VHS of the same name.

Hip and Hop Koopa are exploring a pyramid in Desert Land, where they find what they claim to be looking for upon entering the pyramid's tomb, despite the fact that Bowser expected them to mess up. Startled from almost tripping on a shattered Dry Bones, Hip and Hop stumble into each other and crash into a vase, breaking it. Relieved that nothing bad happened, Hip and Hop are startled when a nearby sarcophagus starts to make thumping noises on its own. Not wanting to find out why the sarcophagus is acting up, Hip suggests that they grab the other sarcophagus, belonging to Prince Mushroomkhamen. Lifting the case up together, Hip and Hop exit the tomb with it. 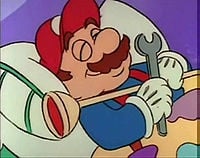 Mario about to wake up from his nap.

By hearing this, Prince Mushroomkhamen is revealed to be Mario, who wakes up from taking a nap at Toad's holiday house in Desert Land, when Princess Toadstool comments about how a nap must have been relaxing after his latest adventure. Mario then mentions that he is still tired, but he is quickly distracted by a Mushroom boy who comes running into the house, screaming about a mad mummy on the loose in Desert Land. Mario leaps out of bed and tells his friends that they need to stop the mummy immediately. 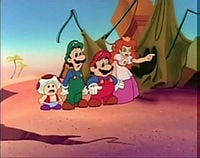 Hip and Hop, who are still hiding out in the pipe, choose to make a run for it with Queen Mushroomkhamen now distracted. When Mario gets out from underneath the tent by jumping through it, Princess Toadstool wonders why Queen Mushroomkhamen is upset. Her question is quickly answered when she sees Hip and Hop run past them with Prince Mushroomkhamen's sarcophagus, so she gets Luigi and Toad to chase after the twins with her and tells Mario to keep the mummy under control while they are gone. 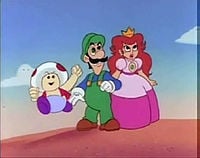 While Mario screams for help, Luigi, Princess Toadstool and Toad chase after Hip and Hop. The twins run over a sand dune with the case, and board the Doomship, which was apparently waiting for them on the other side. King Koopa then congratulates Hip and Hop while taunting Luigi, Princess Toadstool and Toad, as the Doomship flies off. To make matters worse, Queen Mushroomkhamen carries Mario in her arms back to her pyramid, where she tells him that she will never let him get lost again.

Luigi worries that Mario is now going to be lost in a tomb forever, and Princess Toadstool remarks that they would need a map of the pyramids to find him. Toad remembers that he has a cousin who might be able to help them, so he takes Luigi and Princess to visit him. It does not take much convincing for Toad's cousin to then sell a map to the mummy tombs to Princess Toadstool. 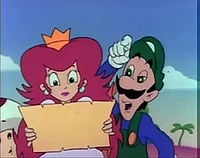 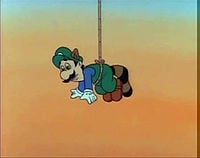 Luigi stuck on the castle with the Steam Cloud Balloon.

Meanwhile, Raccoon Luigi is flying through Dark Land towards Castle Koopa, towing his own Steam Cloud Balloon that Princess Toadstool and Toad are riding in. Just as Princess Toadstool points out that their plan to sneak into the castle is foolproof, Luigi and the balloon get caught in a Mushroom Kingdom twister, and get thrown towards a tower of the castle. Although nobody got hurt, Luigi is upset due to the fact that the twister destroyed his Steam Cloud Balloon. Additionally, two Para-Goombas spot them, and prepare to alert King Koopa.

Princess Toadstool directs Luigi and Toad into the tower, where they find Prince Mushroomkhamen's case. Their only concern now is getting the case past Koopa. Luigi then asks himself "What would Mario do if he were here?", and gets an idea; he salvages parts from the Steam Cloud Balloon and builds a steam powered mummy sled with them. 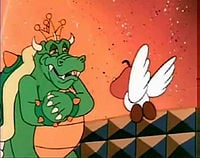 King Koopa, Hip, Hop, and several Para-Goombas gather at the base of the stairs leading to the tower, where one of the Para-Goombas tell Koopa that they have got the invaders trapped. Telling Hip and Hop to watch him as he prepares to take care of the heroes, Koopa orders Princess Toadstool to get down from the tower, and just as he does, Luigi, Princess Toadstool and Toad come speeding out of the door on the steam powered mummy sled with Prince Mushroomkhamen's case.

The Koopas run down the stairs to avoid getting hit, while several Para-Goombas go after the riders on the sled, but they miss due to the fact that the riders ducked. The Para-Goombas fly after them again, but Luigi knocks them away with his raccoon tail. Several more Para-Goombas foolishy stand in the way of the sled, and get knocked aside like bowling pins. After going down another flight of stairs, and bypassing several Chain Chomps, the sled goes flying out of the castle, lands in the moat, and takes off like a motorboat. 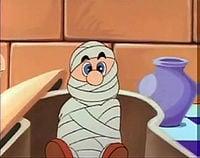 Mario saying that he will get hungry if he sleeps for ten thousand years.

Back in the tomb, Mario notices that Queen Mushroomkhamen has fallen asleep, and decides to make a break for it. Mario makes a huge leap into the air, smashes through the roof of the pyramid, waking up Queen Mushroomkhamen in the process. Mario hops down the side of the pyramid, just in time to meet up with Luigi, Princess Toadstool and Toad, who have returned with the sarcophagus. Luigi hugs Mario, but Mario tells him to stop, as he is already been hugged plenty, while Princess Toadstool unwraps the canvas over his body.

Upon taking a look at Luigi, Queen Mushroomkhamen points out that he looks exactly like her husband, and tries to get him to come with her. Luigi asks to be excused, announcing that he needs to find Toad's cousin, so that he can buy a map to "someplace else". As Luigi runs off into the sunset, his friends, as well as Queen Mushroomkhamen, all chase after him.