The Adventures of Dirk Drain-Head 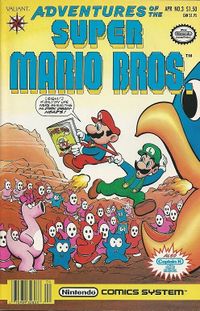 Cover art for the story's reprint in Adventures of the Super Mario Bros. #3.

Mario is impatiently awaiting for the arrival of the postal service when he eventually shows up, but to his disappointment, the Mushroom mailman does not seem to have the item he was waiting for. Fortunately, as it turns out, the Mushroom accidentally gave Mario's wanted item to Luigi - the latest issue of The Adventures of Dirk Drain-Head. As Mario gushes about receiving the latest issue and goes looking for a good place to sit down and read it, the Princess states that she does not understand why Mario finds the magazine so appealing because she considers Baroness Blue Blood much better. Luigi absent-mindedly mentions that he saw the latest issue of Baroness Blue Blood being carried at the comic shop near World 5-1 the other day, and the Princess orders him to go pick it up for her, despite his protests that he had planned on flossing his teeth. Mario makes himself comfortable on the throne, but the Princess promptly throws him outside to go help his brother pick up her comic.

The Mario Bros. make their way through World 5-1, traversing over waterfalls and avoiding attacks from various creatures (which comprise of members of the 8 bits). All through their journey, Mario continually raves about how awesome Dirk Drain-Head is, much to Luigi's annoyance. He also asks one of the Shyguys if he knows of any good locations where he could read his comic in peace. The Shyguy's answers include "by the Piranha Plants in World 7", "the lava pits in World 4-1" (despite that World 4 in Super Mario Bros. 2 is an ice world), and "World 7-2" (which another Shyguy points out is Bowser's headquarters, despite this being Subcon). When they reach the fireball-shooting Birdo at the end of the level, Luigi admits to his brother that he and other good guys hate Dirk Drain-Head and think Mario is foolish for indulging in this nonsense. While dodging one of the Birdo's fireballs, Mario accidentally drops his comic book, and panics about losing it. Luigi eventually talks him into leaving the comic behind for now, but just as they're entering the Mask Gate to exit the level, Mario sees the creatures getting their hands on his comic and looking at it themselves. He protests to Luigi to let him go back and grab it, but his younger brother denies him. Later, in the comic shop, Luigi learns that they are out of Baroness Blue Blood issues because Bowser just bought them all to line his Birdo cages, while Mario asks the storekeeper if he will give him a half-price discount on a Dirk Drain-Head issue that has a ripped page.