World 7-2 (Chapter 7-2 in Yume Kōjō: Doki Doki Panic; titled And Now the Final Encounter![1]) is the second level of World 7 in Super Mario Bros. 2, and is the final stage overall in the game. 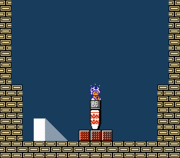 Subcons about to be freed (NES).

7-2 mostly takes place in Wart's Castle[2]. In Yume Kōjō: Doki Doki Panic artwork, it is shown as an Arabian style palace with onion shaped domes. This is the longest level in the game, and it features two encounters with Red Birdo; one of which can be bypassed, and the other of which is necessary to obtain the key to Wart's Lair[3]. It features a sudden battle with a Mask Gate at the end, which comes to life and attacks the player before allowing them to advance to the final room, where Wart is fought. The Mask Gate can be defeated by throwing the Mushroom Blocks in the room at it. Hitting it three times immobilizes the Mask Gate, allowing the player to enter it and head to Wart's room. Wart attacks the player by spitting bubbles. He must be defeated by throwing vegetables that come from the Dream Machine into his mouth when he opens it to spit bubbles. Once this is done six times (four times in Yume Kōjō: Doki Doki Panic), Wart is defeated, and the inhabitants of Subcon can be freed. The scene then transitions to an animation of Mario sleeping, while dreaming about the game's events as the cast roll plays, finishing with “The End” being written in a cursive font. In the NES version, the screen will loop on the image and the system will need to be turned off or reset. In the SNES and GBA versions, the game can return to the title screen by pressing

and will be given an option to save their progress.