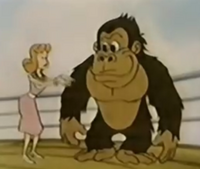 Miss Persimmon O'Hara is a character featured in the Saturday Supercade episode "Gorilla My Dreams".

Miss O'Hara is a rich Southern Belle who attended a cruise. The pirates Barnacle and Long John, who were also at the cruise, attempt to kidnap her and steal her money, but she was saved at the last moment by Donkey Kong, who had sneaked on board in an attempt to get away from Mario and Pauline. Having lost her glasses in the struggle, Miss O'Hara falls for the ape. It is revealed that she owns the biggest banana plantation in the world (much to Donkey's delight), and plans to marry him. During the wedding, however, Mario makes a surprise appearance and successfully captures Donkey Kong. Unfortunately, Barnacle and Long John return and kidnap Miss O'Hara. As they escape from the ship, Donkey Kong – reluctantly freed by Mario – captures the pirates with an anchor. As Donkey Kong subsequently escapes the ship on the back of a shark, Miss O'Hara is rescued by the ship's captain, who falls for her and tosses away his own glasses.