Not to be confused with Lucky Star. 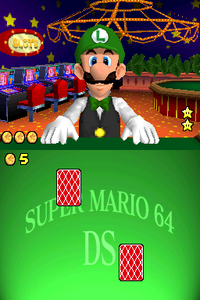 Lucky Stars is one of Luigi's minigames in Super Mario 64 DS.

From a pair of cards, pick the one with more Stars to win coins. Beat Luigi at his own game!